Despite difficult general conditions, the Glatthaar Group headquartered in Schramberg-Waldmössingen records a good 2021 business year. The company‘s total turnover amounted to 220 million Euros generated by the individual companies Glatthaar Keller, Glatthaar Starwalls, Glatthaar Baugrund, Glatthaar Erdveredelung and Glatthaar E-Motion (electric vehicles), among others. The number of employees has also increased; the Glatthaar Group currently employs 520 people in production, project management, administration and the sales department. In addition, more than 140 teams are working on the construction sites in basement assembly. Even under difficult general conditions, Glatthaar Keller achieved an increase in turnover of 7% – the order backlog of the market leader of prefabricated basements grew by more than 20%.

The company founder, Joachim Glatthaar, was satisfied about the fact that Glatthaar Keller was able to look back on a totally successful year 2021 despite major challenges. However, due to poor weather conditions at the beginning of the year, corona-related staff shortages in production and assembly as well as delivery bottlenecks, the company was not able to increase its sales and only partially achieved the turnover target, according to him. In this context, Joachim Glatthaar complimented the cohesion of the staff. „We had to react flexibly and improvise. This was an additional burden for our workforce, who supported everything excellently.“

With a turnover of about 158 million Euros, Glatthaar Keller with locations in Germany, England and Switzerland as the largest individual company of the Glatthaar Group achieved a new record in 2021. Though the result was still positive, it was below previous year‘s level, as stated by the company. „We were not able to pass on the price increases of the raw material markets to our customers at the same level immediately,“ expressed the commercial general manager Reiner Heinzelmann. As a construction company, we are standing between the building materials industry, trade and logistics, on the one hand, and the client, on the other hand. Reiner Heinzelmann: „If you analyize the annual financial statements of the building materials industry and the building materials trade, you will realize that the price increases for building materials are less due to the cost increases to the same extent, but rather to increased profit expectations at the expense of the manufacturing sector and the clients.“ Against this background, Glatthaar Keller assumed a price buffer function for its customers in 2021, so that only a small proportion of the cost increases reached the clients.

Currently, Reiner Heinzelmann refers to a healthy order situation, stating that in the first quarter of 2022 incoming orders increased by more than 10 % compared to previous year. Owing to good weather conditions, Glatthaar Keller was able to almost double its sales volume compared to last quarter. However, due to the war in Ukraine and additional price increases in the energy and raw materials sectors, the general manager expects the demand for building permits for single-family houses and duplex houses to fall in the course of the year. All in all, Glatthaar Keller is aiming at further sales growth to about 180 million Euros in the current year.

Last year, Glatthaar Keller invested, among others, in the Simmern location in the Hunsrück region, as Heinzelmann added. An administration building was erected there, offering employees a modern working environment with high standards in termes of energy efficiency. With the new building 34 new jobs were created too, according to him. By the acquisition of a 3D printer for the production of concrete elements, the company is performing pioneering work and uses this process for the first time in the construction sector, according to the supplier.

Considerable amounts of CO2 emissions can be saved by optimizing building components and the reduced demand for raw materials. In 2021, the commitment in the field of electromobility was further expanded – Glatthaar E-Motion started selling the all-wheel-drive electric commercial vehicle EVUM aCar – as stated by them. „All companies in the Glatthaar Group attach great importance to sustainability and the protection of resources,“ emphasized the general manager.

Therefore, the employees in administration are now provided with new electric cars as pool vehicles that can be used as company car for business travel. The company generates the required „green“ electricity at all locations with its own photovoltaic systems. 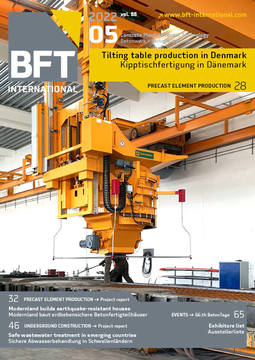 According to the management of Glatthaar-Fertigkeller GmbH the building owner couple Schmitz from Remagen in Germany has luckily received the 40,000th precast basement supplied by Glatthaar. This is...

Thomas Naunheim has become new technical manager at Glatthaar-Fertigkeller based in Schramberg/Germany. Since 2009, the Koblenz-born engineer has already been working in the technical department of...

Obviously, any company will celebrate its 50th anniversary. By contrast, it is probably far less common to celebrate 33 years of doing business. The latter, however, is undoubtedly in the focus of the...

With its new 2-D module, Glatthaar-Fertigkeller GmbH & Co. KG now illustrates even more vividly the possible uses and technical prerequisites for a dry, warm and tight basement. Experience has...