Upon the official introduction of Eurocode 2 (DIN EN 1992-1-1 [1], hereinafter referred to as EC2), several German states, including Bavaria, Hesse and North-Rhine Westphalia, provided the option, in mid-2012, to continue to design structural elements in accordance with withdrawn national standards (such as DIN 1045-1 [2]) until the end of 2013. From 2014, however, structural frameworks of buildings must be exclusively designed in accordance with EC2, with only a few exceptions. Since the middle of 2013, bridges have had to be designed in accordance with [3].

This article deals with the design of prestressed precast elements with pretensioned tendons according to EC2. Some of the images and calculations included in this article were taken from the worked example of “Prestressed concrete girders according to Eurocode 2” published by the Fachvereinigung Deutscher Betonfertigteilbau e. V. [4].

For X0 and XC1: the degree of prestressing may be freely selected ensuring a maximum crack width of wmax = 0.2 mm for a frequently occurring combination of actions;

For XC2 to XC4: decompression must be verified for a quasi-permanent combination of actions;

For XD and XS: decompression must be verified for a frequently occurring combination of actions.

Due to its clarity, the freely selectable degree of prestressing continues to be frequently referred to as “partial” prestressing, although this term taken from [8] is no longer used in the EC2. However, the benefits of partial prestressing remain the same:

The degree of prestressing and the prestressing force may be freely selected in response to the specific requirements.

Lower losses of prestress due to creep as a result of lower compressive stresses in the concrete (Fig. 2b);

Losses due to the short-term relaxation of strands should be taken from the national technical approvals granted to prestressing steel strands.

Losses of prestress resulting from elastic compression of the girder are determined on the basis of the identical strain of the concrete and the prestressing steel.

Time-dependent losses of prestress Δσp,c+s+r due to creep, shrinkage and long-term relaxation of the prestressing steel must be considered in accordance with EC2, 5.10.6. Unfavorable assumptions are made in this regard because the actual conditions for determining time-dependent losses of prestress are difficult to estimate. The most unfavorable case for determining losses of prestress due to creep occurs if the precast elements are put to storage for an extended period prior to their installation because their prestressing initially causes high, creep-inducing compressive stresses to act on the concrete, which is still at a relatively early strength stage. However, EC2 no longer includes the exceedingly conservative assumption according to [8], which specifies a storage period of six months, because precast elements are nowadays installed and subjected to loads at a much earlier point in time. Reference [4] thus assumes that the covering is added as early as after 21 days.

Losses of prestress due to creep and shrinkage will increase with decreasing humidity, which is why [4] specifies a safe constant humidity of 50% (alternatively, 70% in storage and installation condition and 50% in the final condition).

The shrinkage values, and thus the losses of prestress due to shrinkage, specified in the EC 2 are lower than those listed in the DIN 1045-1 standard. As a result, the capacity of prestressed precast elements can be utilized to a somewhat higher degree than according to DIN 1045-1. Modulus of creep values for concrete strength classes greater than or equal to C30/37 (and thus generally for precast elements) are identical to the values stated in DIN 1045-1. Modulus of creep may be determined graphically in accordance with EC2, 3.1.4 (Fig. 4).

Annex B to EC2 contains the basic equations to determine modulus of creep and dry shrinkage strain. These equations can be used to directly calculate the creep and shrinkage coefficients for various parameters (including varying humidities in storage and final condition). The sophisticated calculation outlined in [4] is associated with only minor benefits.

At concrete compressive stresses of σc > 0.45 fck(t0) (where t0 is the time of load application), EC2, 3.1.4 (4) specifies that the non-linear nature of creep should be considered by applying a larger coefficient of creep. However, the stress limit of 0.45 fck(t0) does not relate to short-term loading at the construction stage but to the permanent, creep-inducing load [5].

Decompression can be verified either by a simplified method assuming a fully compressed cross-section (“full” prestressing, Fig. 5a) or on the basis of the decompression limit (similar to “restricted” prestressing according to [8], Fig. 5b).

The verification requirements according to [4] (Fig. 5b) are not met (σc,Dek = 0.8 MN/m² > 0) because the example relates to an interior structural component. The prestressing force would have to be increased or a larger number of strands be used if the component belonged in an exposure class greater or equal to XC2. The choice of the appropriate exposure class (open vs. enclosed building) is crucial because this consideration has a significant influence on cost.

Decompression need not be verified for the end section of a prestressed component. In the case of prestressing with pretensioned tendons, the length of this end section corresponds to the dispersion length ldisp in accordance with EC2, 8.10.2.2 (4). The serviceability of the end section is proven by verifying crack control (see also [5]).

The stress verifications for concrete, reinforcing and prestressing steel are shown in Table 1. Mean prestressing forces may be used for the purpose of verifying stresses [5].

Furthermore, if pretensioned tendons are used, concrete compressive stresses that occur due to prestressing and own weight must be limited to σc ≤ 0.7 fck(t) at the time of transmitting the prestress in accordance with EC2, 5.10.2.2 (5). However, the utilization of the greater value of 0.7 fck(t) requires certain measures to be taken immediately after transmission of the prestressing force (i.e. checks for cracking within the transmission length) (see [5]). In all other cases, concrete compressive stresses (such as those occurring if post-tensioned tendons are used) must be limited to ´σc ≤ 0.6 fck(t).

If these requirements are not met in the bearing zone, one of the alternative options available is to apply a bituminous coating to some of the strands in order to insulate them. This insulation eliminates the bond effect in these areas so that the prestressing force is reduced in the bearing zone.

According to the DIN Technical Report 159, 4.2.3.2.3 [10], the concrete strength fcm,min(t0) must at least be equal to 1.5 times the maximum concrete compressive stress at the time of transmitting the prestressing force whilst amounting to at least 25 N/mm².

7. Transmission and anchorage of prestress

Anchorage length lbpd: The anchorage length is determined as σpd = fpd = 1,500/1.15 = 1,304 MN/m² in the ultimate limit state and thus reaches a higher design level. For this reason, a greater length is required to anchor the entire prestressing force in the concrete.

The following cases are distinguished for anchorage verification purposes:

No cracking within the anchorage length lbpd: no further verifications of anchorage and no additional reinforcing steel are necessary.

Cracking within the anchorage length lbpd and outside the transmission length lpt2: no further verifications of anchorage are necessary, but additional reinforcing steel might be required to absorb tensile forces (Fig. 7a).

Cracking within the transmission length lpt2: either additional reinforcing steel (Fig. 7b) or a sufficient tendon overlap (Fig. 7c) is necessary. Alternatively, the prestressing force may be increased.

In general, those areas are considered cracked where the flexural stresses caused by external loads acting on the lower edge are greater than the concrete strength fctk,0.05 in the ultimate limit state whilst taking the prestressing force into account. Anchorage verifications differ only insignificantly from those outlined in [8].

When designing precast elements, EC2, 10.2 requires that temporary design situations be considered. For the purpose of bending and axial force design, the partial safety factors according to EC2, 10.2 (NA.4) may be reduced to γG = γQ = 1.15 for the transport and assembly conditions. Reference [4] assesses the following structural situations:

Lifting from the formwork and on the construction site, including the design of the transport anchor,

Transport to the construction site,

This article outlined several distinctive parameters that need to be considered when designing prestressed precast elements with pretensioned tendons in accordance with Eurocode 2 [1]. On the other hand, no radically new approach is required because many of the verifications are already known from the DIN 1045-1 [2] standard. Major industry associations have prepared worked examples (see [4] and [14]) to provide guidance to get familiar with the design of prestressed concrete elements on the basis of the Eurocode. 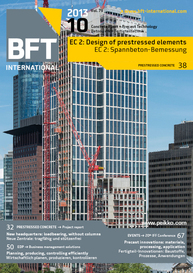 In the past decades, corrosion-induced damage has repeatedly led to severe component failure in prestressed concrete structures. This is typically caused by inadequate design or poor workmanship,...

Method and tooling for manufacturing ­prestressed concrete members by molding