Elbe Decken, with 20 production lanes, a storage capacity over more than 45,000 m2 and an annual production capacity of 500,000 m2, is one of Germany’s leading suppliers of precast prestressed concrete for floor slabs. In production of these products, various concrete quantities are needed at various times in the plant. The automated mixing plants must precisely determine the specific concrete quantities and their consistencies that must be made available at a given production site.

In addition, the concrete mixes from Elbe must meet the exacting quality requirements of laboratory concrete. For this reason, Elbe decided at the beginning of this year to optimize its processes by modernizing the two mixing plants commissioned in 1995. This measure required an exchange of the control engineering for precast prestressed floor slab production and for mixing the various concrete mix formulations. The contract for programming and implementing the new control engineering was awarded the Unitechnik Group.

To optimize the mixing process at Elbe and to ensure constant ongoing high quality in the future, Unitechnik exchanged the S5 control system from Siemens for an S7 version, and integrated WinCC into the higher-ranking system as new process control. In programming the process control system, automation specialists integrated all processes required for prestressed precast floor slab production, including mix formulation management, stockkeeping, as well as visualization with malfunction reporting.

In addition, man-machine-interface systems were employed in the area of mix control; the staff working in plant production can use their panels to call up and monitor processes. This enables highly detailed monitoring of production and quick intervention in an emergency situation. To ensure precise composition of the various concrete mixes, Unitechnik installed sensor-controlled moisture regulation and new weighing technology in the system. Modernization

Because production downtimes were required to be kept to a minimum, all measures had to be carried out within five days between, Christmas and the new year. “In modernizing the concrete mixers, Unitechnik has surpassed our expectations. The exchange of the control units and integration of the new process control system resulted in optimization of our mixing process and reduced concrete waste by up to 9 %,” declared Thomas Münzberg, Plant Manager at Elbe Decken. “At the same time, we profit from simple operator handling and the large scope of functions of the new control system.” 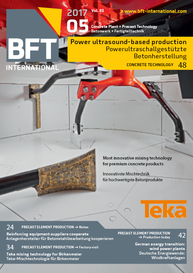 In many European countries, like Belgium or the Netherlands, up to 70 % of all building projects are implemented by means of precast prestressed concrete floor slabs in the meantime. Despite their...

In February 2016, the extensive GWH Riedberg 2.0 project in Frankfurt am Main, Germany, was completed on schedule by the developer GWH Bauprojekte GmbH. The 71 barrier-free apartment, ranging from 66...

Jumbo concrete floors with unsupported spans of more than 16 m

At the beginning of 2015, a new construction project of the Dresden private all-day secondary school was completed by the owner/developer, the IBB Institute für Bildung und Beratung GmbH, completing...

The Wellnesshotel construction project near Frankfurt am Main of the Stork Hotels & Thermen Group based in Paderborn has an investment sum of around 12 million euros. At Niederhofheimer Strasse in...