The European Soccer Championship that has just come to its end triggered a giant investment avalanche in the Ukraine and Poland. Both countries profit from the infrastructure projects completed on the occasion of UEFA EURO 2012. Rampf was one of the companies that contributed to it: The paved areas surrounding the stadiums in the Ukraine and two EURO 12 stadiums in Poland were constructed with concrete blocks manufactured in molds from the German company Rampf.

Apart from the new football arenas, new expressways and railroad connections were built, the airports expanded and railroad stations upgraded. Numerous key investments, such as the football stadium in Poznan and the two new stadiums in Gdansk and Wrocław were erected. The total value of the public investments in Poland are estimated to amount to around 20 billion euros and those in the Ukraine at some 10 billion euros.

The stadium in Poznan, designed for 43,000 spectators, opened already in September 2010, following comprehensive modernization works. At the same time, the entire area in front of the stadium was rede­sig­ned and paved with CITI paving blocks, manufactured by Polbruk S.A. in molds from Rampf Formen GmbH. Polbruk S.A. employs over 650 workers in a total of 18 plants, the plants in Florczaki and Niepołomice being among the most modern concrete paver plants in Poland.

Another paved work of art could be admired by around 44,000 spectators already in September of last year on the occasion of the game between Germany and Poland in Gdansk. The entire infrastructure and the new PGE Arena in Gdansk was paved with Baltic-Arena blocks manufactured by Kamal Sp. z o.o. from Bydgoszcz, Poland. Two different molds with hydraulic control for diagonal keying were used for their production; the molds were specifically manufactured for this purpose and delivered by Rampf Formen GmbH.

In the second host country of EURO 2012, the Ukraine, Rampf know-how was also in demand. In collaboration with the Rampf Design Center (RDC), the Ukrainian Unigran Group S.A. developed a customized interlocking paving block with good keying characteristics, suitable for mechanical laying. Here, a new block, appropriately named “Joker” for paving numerous extra-wide walkways of several kilometer length was used. “Joker” as well as such classic blocks like the “Double-T” and the “All-Interlock” were installed using laying machines. All of the collaboration projects were completed on time for the kick-off of EURO 2012. 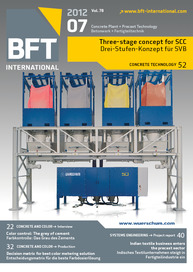 CONCRETE AND COLOR -> Interview
Color control: The grey of cement

As the fashion industry, manufacturing of concrete blocks is likewise subject to trends.  Finally the customer takes the decision about shape, surface and laying pattern, explains Armin Rommel, the...

Started in 1926 as a blacksmith shop, the Rampf group of companies has evolved into one of the worlds leading manufacturer of steel molds for the concrete products industry. Worldwide, the group...

All those interested will have the opportunity to acquaint themselves with the product range offered by Techmatik and get to known about the technological processes. In the summer of 2004, the...

Rampf Formen GmbH, a leading manufacturer of brand name steel molds for the concrete block industry, presented itself a great number of customers coming from Germany as well as foreign countries at...