The Schick group  is a company with traditional values, tightly organized and run by the owner. Even the naming of the CEO relies on continuity. Already in its fourth generation, there is an Anton Schick, who has controlled the „fate“ of the company since 2000 - a through and through down to earth family business. However, the reputation of Schick is not only based on close family ties. The principles of efficiency and reliability are also paramount; basic requirements for the company’s long-term success.

In 1904, the stonemason Anton Schick founded the construction company of same name. As a „master of his craft“, masonry, the young company rapidly carried out large building projects, including the construction of the Kurhausbad in Bad Kissingen. The construction of the concert building, the Regentbau, near the Kurhausbad, which is famous all over Europe, bears the company’s signature work on a number of the building’s components. Schick recorded a steady growth in the following years. With their work on building projects in through the 1960s to 1980s, the construction company was instrumental in the further development of Bad Kissingen from the traditional cure town to a modern rehab’ center. After these regional successes, the company’s know-how was finally recognized nationwide. The Federal Social Insurance Institution (BfA) and various regional Social Insurance Institutions drew on the experience of Schick; the leap to become a national construction company was achieved.

To supply the numerous contracts, Anton Schick III started to expand the company’s productivity. First, with a concrete batching plant in Bad Kissingen in 1970, which was extended shortly afterwards by a precast concrete plant. With a new, modern factory for precast components of reinforced and prestressed concrete, in a seperate location, they were capable of meeting increasing nationwide demands. With the construction of another precast concrete plant and an ultra-modern batching plant in Meiningen (Thuringia) in the early 1990s, the production capacity of finished parts increased significantly.

The conversion and modernization of the plant in Bad Kissingen with high-tech mixers from Pemat Mischtechnik enables them to manufacture new and more accurate products with far higher standards of design and stability in terms of material, than was previously the case.

In April 2011, the company Anton Schick GmbH & Co. KG was looking for a batching plant manufacturer who would be able to modernize the plant, manufactured by Kabag in 1983. The extensive know-how and years of experience in plant renovation were the distinguishing features and the main reasons why Pemat prevailed against four competitors and won the contract for the job.

After thorough preparatory planning Pemat presented the following system design: The aggregates are loaded from the truck into a ground level hopper. The discharge chute directs the aggregates into the bucket, which is characterized by its compact design. The bucket conveyor shaft is fully galvanized and lined with rubber over the entire length on the discharge side to prevent premature wear of the shaft. To increase the life of the inlet and outlet of the bucket conveyor Hardox wear plates were fitted. The bucket conveyor transports the aggregates upwards. It is operated with a frequency converter that ensures a smooth flow, minimizes current peaks and reduces mechanical wear.

A traversing reversible conveyor belt positioned above the aggregate bins, distributes the aggregate to individual bins. Below the bins the sector gates feed the aggregates onto weighing belts for stationary weighing. Here three feeder belts are also used to charge the weighing belts. Pemat put great emphasis on quality and the latest technology for the Conveying and Weighing Equipment. After reaching the target weight, the conveyor belt passes the aggregates into the corresponding skip hoist which moves up to the emptying position and discharges the aggregates into the mixer. A shallow skip hoist feed was planned as only a small pit depth for the skip hoist was available. This skip hoist is distinguished by its low overall height and features a double-track rail lift, which minimizes wear.

The existing cement silos and silo accessories have recently been modified and a new additional cement silo was built in front of the production hall. The two cement scales are filled by the cement screw conveyors. The cement screw conveyors are arranged so that both scales can be charged from each cement silo. This way the independent filling of both cement scales is guaranteed. The required amount of water is determined by a pulse counter with a rough-, fine-flow turbine and water injection into the mixer. Furthermore, two water weighers (one per mixer) ensure the correct dirty and fresh water dosages. Both production lines have one additive scale each and a joint colour scale assigned to them. When modifying the plant, great importance was placed on good accessibility and ease of maintenance. For this reason, a complete service platform was planned for access to the scales, screw conveyors and dust filters.

The mixer, the crucial element of the batching plant

In search of a suitable mixing technology for the production of high quality, coloured precast elements, only the Pemat planetary mixers with additional whirler (patented) are qualified. The choice fell on the two planetary mixers PMPR 1875 and PMPR 2250. The most important criterion was to achieve uniformity of the mix with varying mixing times and materials. The purpose of the mixer was not just to mix, but to mix homogeneously, quickly, avoid spherical formations and catch fine materials. Properties which only a mixer with an additional whirler can achieve. For the production of colour, special and spray concrete as well as SCC the planetary mixer with additional whirler delivers excellent results. To avoid contamination of the batching plant two automatic air vent filters with a fan were used to ventilate the mixers.

The two planetary mixers are individually cleaned by a Pemat automatic high-pressure cleaning system. By that way an extremely high degree of purification is achieved, and a longer service life of the mixer is guaranteed. Due to the frequent colour and production changes a high-pressure cleaning system that reduces the cleaning time and thus increases the productivity of the plant was absolutely necessary. The electrical control system monitors and controls accurately and reliably (verifiable) all procedures for dosing, weighing, loading and mixing. An automatic operation of the plant with different mixing recipes is thereby guaranteed trouble-free.

In co-operation with Schick, Pemat has optimally modernized the plant and combined the existing precast plant with the ready mix concrete plant. Pemat has succeeded in modifying the plant so that the efficiency of the plant is reestablished.

The current order book at Schick shows the value of upgrading. The Group turnover increased by eight percent to about 40 million € in 2011. Schick made a further step towards the future by receiving the Creditreform solvency certificate (CrefoZert). With this the Creditreform Würzburg certifies the company’s excellent credit rating. The basis of the certification is a professional financial statement analysis by Creditreform Rating AG, a BaFin certified subsidiary of Creditreform AG. Added to this are the data of the current economic information as well as assessments of the current situation and future prospects of the candidates, which are determined in a personal interview. The company Anton Schick GmbH + Co.KG exceeds all criteria.

Increasingly, the estimations from the company Creditreform form the decision basis for the award of contracts in the construction industry. Reports by Creditreform are more and more often on the negotiating table when discussing a contract with a client. For this reason Schick had decided to take advantage of the opportunity to have their credit rating certified. Schick can now actively inform its customers with this certificate. 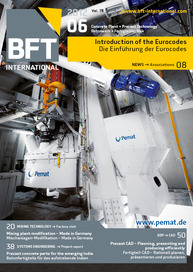 Beton-Betz GmbH in Kirchardt near Heilbronn in Germany, a medium-sized company with a workforce of around 80 employees, has manufactured concrete products for building construction and agriculture...