In late August, the largest trade fair for concrete and concrete technology in Latin America opened for the fifth time in Brazil. Already on the first day of the event, the organizers reported record attendance, with the final count even showing a growth of 13 % (nearly 25,000 visitors in 2011).

We as exhibitors also experienced record figures at the fair: e.g., the thermometer went down to only 11 °C. We, like many other industrial colleagues from our industry in Europe and North America, had travelled to Brazil with lighter clothes than we ended up needing. A very uncomfortable mistake. On the day before the fair opened, we set up our stands under oppressive, smouldering temperatures around 32 °C, and then we had to cope with a steep temperature drop on the first day of the fair.

But the steady stream of visitors made up for the cold. They came in torrents and crowded our stand to ask questions and conduct interesting talks – and the flow did not diminish even an hour after the fair closing time. So, the three cold days went by for us quite quickly.

I was also pleased to find out what you can read between the lines at such a fair. Whenever you deal with people from faraway economic regions and/or cultural areas, you stand to gain special knowledge – that’s how I’ve always seen it, ever since I set forth alone as a backpacker on the other side of the globe in my early twenties. And that doesn’t change, even as you get older. Among the many insights that I bring home from this journey are: how progressive Brazil is in a number of domestic political and economic matters – “clever” you might say colloquially. Or, to take another example, in the course of a conversation I learned that Brazil currently prefers a rather simplistic way to dispose of old tires. Here is a definite need for action. In particular, such topics as urban planning, infrastructure, and waste disposal keenly interest visitors to Brazil. And to us from the construction industry there are many possibilities of transferring existing know-how and to position new ideas/concepts in new markets.

Let us all gain a little motivation from the inscription on the Brazilian flag: “Order and progress”. Or google the symbolism of this flag, if you don’t know. That is a very entertaining story … 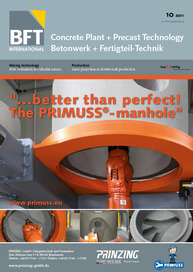