To answer this question, the coloring effect of Iron Oxide Pigments has been combined with the photocatalytic activity of TiO2. A method was developed to create a stable Iron Oxide/TiO2 compound (Fig. 1) in cooperation with the University of Turin (Department of Inorganic Chemistry). Through this method, the whole color range of yellow, red and black photocatalytic Iron Oxides is created.

The following typical properties of colored photocatalytic concrete have been determined in extensive trials for these new pigments: Air Pollution (NOx abatement), Self-Cleaning, VOC Reduction and Influence on Microbiological Growth.

Methylene Blue, a commonly used dye for the determination of self cleaning properties of photocatalytic materials (DIN 52980:2008-10, Draft Standard ISO/CD 10678) was sprayed onto concrete blocks and the dye degradation was measured over time under irradiation (Fig. 4).

The blocks made of standard cement and photocatalytic pigment showed a nearly total degradation of the dye after 8 hours whereas all other samples show lower degradation rates.

For this test, concrete blocks were exposed to an atmosphere containing Benzene (13.5 ppbv), Toluene (23 ppbv), Ethylbenzene (20ppbv) and o-Xylene (20 ppbv). The conversion (photochemical oxidation) of these components into harmless products is measured.

In co-operation with the University of Turin (Department of Plant Biology), a study was initiated to test the inhibition of the germination of bacteria, yeasts and fungus by photocatalytic products in concrete and mortar applications. Fig. 6 demonstrates the degradation effect on mold growth.

The above mentioned synergistic effect between the Iron Oxide and the TiO2 component can be observed also in the coloring properties. When used as an integral color in concrete, photocatalytic pigments demonstrate a more brilliant and stronger color. Photocatalytic pigments as presented in this article do not influence the final concrete properties. They are compliant to the applicable European Standard EN 12878 (“Pigments for the coloring of building materials based on cement and/or lime – Specifications and methods of test”) and marked “CE”.

This article presents a new range of functional inorganic pigments: Iron Oxides made photocatalytically active by coating with a thin layer of TiO2. Tests regarding NOx- and VOC-abatement, influence on microbiological growth and self-cleaning properties confirm the new pigment’s universal and constant photocatalytic activity, which make them an economically valid alternative to current photocatalytic materials. 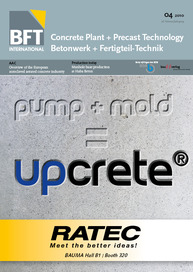 New Color Pigment is Powered by the Sun

Rockwood Pigments, in collaboration with the University of Turin, world-renowned for its expertise in the field of photo-catalysis, has developed a manufacturing process which merges the coloring...

Huntsman Pigments and Additives is a leading supplier of inorganic pigments and functional additives for the construction industry. In addition to our high-quality pigments, pigments, our customers...

Huntsman Corporation announced today that it has completed the acquisition of the Performance Additives and Titanium Dioxide businesses of Rockwood Holdings, Inc. Following businesses were, among...

The specialty chemicals group Lanxess has expanded its product portfolio of black pigments for coloring construction materials. The new powder pigment Bayferrox TP LXS 5253 is suitable for use in all...

Ultra-high-performance concretes are regarded as the construction material of the future. In coloring them, however, it must be ensured that the specified compressive strengths of over 150 MPA...