In view of increasingly challenging requirements, the production of concrete, demanding enough as it already is today, will in future become even more complex. With its investment in a new, state-of-the-art concrete mixing plant with a fully automated color batching system, the German concrete producer Karl Bachl Betonwerke GmbH & Co. KG is taking an important step in the direction of modernization and towards greater sustainability. The ground for the new plant was broken on 21st September.

The climate change and its consequences present major challenges, also to the cement industry. Here, too, the same as in many other segments of industry, greenhouse gas emissions must be drastically reduced. With its investment in a new concrete mixing plant at the Deching location, Karl Bachl Betonwerke GmbH & Co. KG is meeting this challenge and makes an important contribution to a climate-neutral future. Already now, the company is taking the first step away from using clinker-intensive cements, toward a new cement generation, as well as with a comprehensive filler line in order to sustainably reduce CO2 emissions. Just a few weeks ago, the BFT editorial office personally convinced themselves of the performance and innovation spirit at Bachl headquarters in Röhrnbach (see BFT 10/2022, p. 64 ff.).

The new concrete mixing system is another investment of the company in environmental protection. “We are pleased that we, with the new concrete mixing plant, can contribute to responsibly dealing with the environment and with our existing resources,” says Wolfgang Paul, Managing Director of Bachl Betonwerke, and continues to explain: “Not only the sustainable construction method with CO2-reduced cement and/or CO2-optimized concrete formulas is new, but also the environmentally-conscious production of concrete which, in part, consists  of recycled materials. Moreover, instead of energy-intensive water steam, we use concrete-core activation for storing and time-delayed release of the heat recovered via a wood chip heating system. The resulting process heat will then be used for concrete production.”

After the old, post-war concrete mixing plant had reliably served for more than 60 years, a newbuild had become necessary. The background reason for this was not only that continuing development of today’s construction materials can be possible only with modern technology. Requirements placed on industrial health and safety were likewise given highest priority for the newbuild. This was one of the reasons for deciding on the industrial systems provider SBM from neighboring Oberweis, near Gmunden on Lake Traunsee in Germany.

Latest mixing technology and the advanced color batching plant will in future permit modern, faster and, most of all, high-quality production of a great variety of concrete types. “We regard the new plant as investment in the future of our location. It will be the foundation stone and, in that way, the heart of our future concrete plant at the Deching location. In this way, the continued existence of the concrete plant and its jobs will be ensured,” declares Wolfgang Paul.

The new concrete mixing plant will be erected with an equally modern and future-viable residual concrete recycling plant which, again, will at a later time be supplemented with a filter press. With this recycling concept, both the entire process water as well as residual concrete quantities can be broken down into individual constituents and will again be fed into the cycle of concrete production.

The innovative 3D architectural concrete façade of the new mixing plant will be an eye-catcher. The combination of modern mechanical engineering and traditional construction workmanship enables implementation of this exceptional structure in concrete and enables seamless integration of this concrete mixing plant into its surroundings. 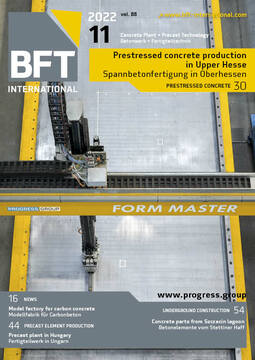 The construction of a mineral spa high on the mountain gave rise to manufacturing concrete in dizzy height, with a breathtaking panoramic view of Lake Lucerne. As the construction site cannot be...

Karl Bachl GmbH & Co. KG looks back on a long, successful company history: the Bachl company was founded in 1926 in Deching near Röhrnbach in the Bavarian Forest region of Germany. Following the...

ACTs Sales Manager and engineer on the project, Tom Krueger, worked closely with MBO owner, Jeff Opachinski, and his son Steve, Plant Manager, to design a turnkey mixing and batching plant that...

The ThermoPin anchor system is a connecting anchor with DIBt approval for core-insulated double walls and sandwich walls with self-supported and supported facing layer. The corrosion-resistant...

Lehde is preparing for the future by investing some 0.5 million euros in the company headquarters in the German city of Soest. The company plans a new high-tech concrete mixing plant, an additional...