The problem with quality management and control in the production of concrete paving blocks and slabs is that all the test methods described in relevant codes and standards (splitting tensile strength, scaling resistance, etc.) only provide meaningful results at a high test age (generally starting at 28 days). By this time, however, the products will often have been delivered to the job site and used for installing block pavements, which is why the results of these normative methods are usually unsuitable for the quality control and management requirements at the block producers’ premises.

For this reason, quality-conscious concrete block producers use further quality control procedures in addition to the standardized methods for conformity verification (in accordance with DIN EN 1338 and DIN EN 1339). These procedures should be as simple as possible and must deliver reliable results very quickly so that production parameters can be adjusted immediately. Many block and slab producers use one or more of the following methods for this purpose, among others:

1) Measurement of the pallet and/or block weight on the wet and/or dry side;

2) Conducting the water penetration test on the wet side;

3) Determination of the capillary suction and drying behavior of the facing concrete layers on the dry side;

4) Determination of the rear moisture penetration of the paving blocks or slabs on the dry side.

In addition to these simple methods, more sophisticated methods for checking the compaction of face and core concrete layers on the wet side have been available on the market for several years (these methods will not be discussed in detail in this article).

Since the methods referred to above provide early-stage indications of expected variations in the quality of the products, they allow production parameters to be adjusted early on, unlike the established normative methods. Thus, pallet and/or block densities can be used as a basis for ascertaining whether the products were compacted properly and whether the properties of the finished products can be assumed to meet the specified requirements.

Determining the capillary suction and drying behavior also provides indications as to whether the concrete of the paving blocks or slabs was compacted properly or produced too dry, or compacted insufficiently. In addition, these methods provide initial evidence of the facing layers potentially exhibiting critical efflorescence behavior or insufficient scaling resistance. This is explained by the fact that the capillary pore system of face mixes, which quickly absorbs the water impacting the concrete (increased capillary suction according to Fig. 1) and slowly releases it again (slow drying behavior according to Fig. 2), will be largely filled with water within a very short period. If this water freezes when exposed to below-zero temperatures while the capillary pore structure of the facing concrete is almost completely saturated with water, a high expansion pressure will develop, and the risk of damage to the concrete caused by the frost and freeze-thaw action will increase.

Similarly, long contact times between the cement paste and the water will result in water being stored in the facing concrete for a long time, which allows more hydrated lime to be transported via the capillary pores from deeper areas of the concrete to its surface. This behavior makes these products more susceptible to efflorescence.

Similar information is provided by the “rear moisture penetration” test. If concrete paving blocks and – due to their lower thickness – concrete slabs show an increased moisture penetration on their rear sides, the risk increases during use that (deviating from the normative specifications) water accumulating on the bedding (see Fig. 3) is transported from the products’ rear side through to their surface (see Fig. 4), where it can cause, for example, strong efflorescence.

The substrate can exhibit insufficient water permeability for a number of reasons, which will not be discussed in detail here. For this purpose, reference is made to the explanations given in [2], [3], [4], and [5].

As a result, such products will exhibit an increased risk of efflorescence and/or frost and freeze-thaw damage to the core or facing concrete layer.

The water penetration test developed by Sika Deutschland GmbH is also based on the absorption behavior of the products’ facing concrete. This method involves the use of a pipette to apply 1.5 mm of water to the facing layer of the paving blocks or slabs within about three seconds. Subsequently, the time is measured until the water has penetrated into the facing concrete and the concrete surface appears slightly damp (see Fig. 5).

The shorter the time for water absorption, the more porous the structure of the facing concrete will be, and the greater the risk of efflorescence and discoloration.

At this point, it is important to stress that although the hydrated lime required for the formation of efflorescence originates from the paving blocks’ cement paste, this does not mean that the block quality is the only factor determining the degree of efflorescence. Accordingly, strong efflorescence is very often associated with insufficient water permeability of the substrate (bedding and/or base course). A first indication of the transport path of the water (through the slabs or via the joints) is provided by the point of origin of the efflorescence on the products. White bloom may thus predominantly occur either on the inner surfaces of concrete slabs (see Fig. 6) or in the slab edge zones (see Fig. 7).

If it occurs more frequently in the central slab area, we can usually assume that the installed products exhibit an increased rear moisture penetration and that the quality of the slabs may have a significant influence on the formation of efflorescence.

If, on the other hand, efflorescence occurs predominantly in the slab’s edge zone (directly adjacent to the joints), as shown in Fig. 7, we can assume that the joint material has an increased water retention capacity, and that it is rather unlikely that the quality of the paving blocks or slabs is a factor determining the degree of efflorescence in this area.

However, what both phenomena (i.e. white bloom in the edge zone and in the center of the slab) have in common is that massive efflorescence will normally occur on the products only if the water (deviating from the specifications of relevant codes and standards) accumulates on the substrate, which makes sufficient quantities of the transport medium (water) available for the formation of efflorescence or discolorations.

As these explanations show, the quick and simple test methods described above provide concrete block producers with the option of detecting poor-quality products at a very early stage. This creates the basis for measures to be implemented early on to restore the specified product quality as part of the in-process quality management and control scheme. These methods thus help reduce the risk of subsequent damage (such as scaling owing to reduced scaling resistance) as well as of efflorescence and discoloration.

The recent past has seen an increasing number of complaints based on the slow drying behavior of the products, rather than on their technical characteristics. End customers claimed that the slow drying behavior alone would result in the products being deficient. From an expert’s point of view, this conclusion is neither appropriate nor correct. For example, none of the test methods mentioned (suction and drying behavior, rear moisture penetration or water penetration test) is governed by applicable codes and standards. Nor do the relevant standards contain requirements for these characteristics. Likewise, products exhibiting increased absorption or slowed drying behavior need not necessarily be of inferior quality (increased susceptibility to efflorescence or reduced freeze-thaw resistance). However, an increased capillary suction and/or slowed drying behavior delivers a first indication that certain product characteristics may be doubtful (Fig. 8).

A technical defect of the products can only be ascertained from the absorption and drying behavior on the basis of further conformity tests or, if applicable, from a correlation with an increased susceptibility to efflorescence or discoloration of the products.

In a specific complaint, the client objected to the quality of curbstones since they exhibited slow drying behavior and also showed hairline cracks on the block surface. Due to their “proven defectiveness”, the client demanded that the block producer remove the entire curbstone system, which prompted the block producer to commission MPVA Neuwied GmbH with proving that the curbstone properties met the requirements defined in the applicable standard. The pictures 9 and 10 included in this article show the as-built appearance of the cracked curbstones.

Neither the slow drying behavior nor the formation of hairline cracks in the curbstones justify, from an expert’s point of view, the demand for the removal of the curbstone system. However, the slow drying behavior and the formation of cracks on the surface of the curbstones represent a justified initial suspicion that the quality of the facing concrete may not be appropriate. For this reason, specific conformity tests (verification of scaling resistance) were carried out to verify defectiveness in the case to above. As the freeze-thaw test results shown in chart 1 indicate, the tested curbstones were well within the tolerance range to meet the normative requirements for scaling resistance despite their slow drying behavior and the hairline cracks appearing on their surface.

We can thus conclude that the presumably defective curbstones were in conformity with relevant codes and standards despite the obvious phenomena identified in the tests (i.e. slow drying and hairline cracks). Based on these results, we should assume that neither the durability nor the serviceability of the curbs was impaired, which is why the tested products were not defective.

On a final note, it should be stressed that curbstones are primarily functional components so that, in the case at hand, even a potentially impaired appearance would not justify the removal of the curb system. 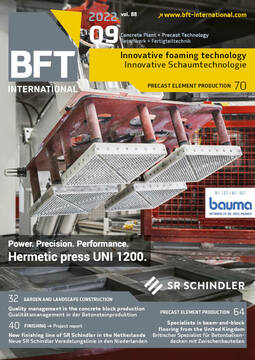 The freeze-thaw resistance of concrete paving blocks must be verified by the slab test (DIN EN 1338). Sometimes clients in Germany demand the CDF method (DIN CEN/TS 12390-9). Independent of the test...

Concrete products manufactured under cool and humid environmental conditions are frequently subject to efflorescence during their first hours. MC-Bauchemie has now developed a new processing aid for...

The quality of concrete products made of semi-dry concrete significantly depends on the compaction (porosity) achieved. The latter already differs within a concrete batch owing to varying filling...