Mixing concrete on an industrial scale requires the use of compulsory mixers. The first models were single-shaft mixers, created around 1870, when J. Monier invented the so-called “iron-reinforced concrete”. BHS developed the twin-shaft mixer as early as 1888 [1]. This was followed by the pan mixers. The history of Eirich begins in 1903 with the production of ring trough mixers (Fig. 1). In 1906, Eirich invented the planetary mixer – the best mixing system in the world at that time (Fig. 2). Licensed production allowed for the manufacture of large unit numbers, which were used worldwide as “concrete and mortar mixing machines” [2].

In 1924, Eirich developed the first mixers with a driven mixing vessel (Fig. 3). These so-called “Eirich counterflow mixers” were introduced in numerous industries. They delivered maximum performance in concrete: filling, mixing and emptying in 40 seconds (Fig. 6). In addition, less cement was required to achieve the same amount of strength. Production of the planetary mixers was discontinued in 1924. The benefits of the Eirich mixer were described as follows [3]:

The eccentric position of the mixing stars and their movement against the material flow generated by the rotating mixing vessel creates an abundance of wide-ranging changes in the position of each individual mix particle in both vertical and horizontal direction as a prerequisite for quick and thorough mixing.

The mixing tools move across the bottom of the mixing vessel sometimes repeatedly during one revolution of 5 to 10 s.

The mixing blades circulate the flowing mix in a process similar to that of a plowshare.

A small number of tools are sufficient to keep the mix in constant motion.

The movements of the mixing vessel and mixing tools add up. Relatively low speeds of rotation also contribute to a high mixing efficiency.

Fixed wall and corner scrapers force all particles of the mix to participate in the mixing process.

The counterflow mixer was the standard in concrete for several decades, which included the construction of so-called “concrete roads” [4] and bridges or “tar roads” [5]. These mixers were also used in the construction of dams, such as the Göscheneralp dam in Switzerland, where three mixing towers were operating at mixing rates of 900 tons per hour [6].

The break came in the 1950s. Responding to the demand for mixers after World War II, many companies started building ring trough mixers and planetary mixers. According to a survey conducted at bauma 2004, four companies started manufacturing ring trough mixers between 1946 and 1965, while eight companies started manufacturing planetary mixers [7]. Then the new/first concrete standards were introduced, specifying such a high minimum amount of cement for structural concretes that the standard strengths were achievable with any given mixing unit.

At the time, Eirich was unable to meet the demand in the additional markets (such as ceramics, glass, carbon, rechargeable and non-rechargeable batteries, friction linings, metallurgy, foundry – totaling over 300 industries today). This is the main reason why no action was taken against the standards. A detailed explanation is included in a report entitled “Why does not any concrete mixer perform ‘well’?” [8].

From the fourth generation to the present

In 1960, Eirich developed a fourth generation of mixers – the counterflow intensive mixer with additional agitator, which is capable of operating at a circumferential speed of up to 25 m/s and ensures an optimum dispersion of fines (Fig. 4). This marked the introduction of the first Eirich intensive mixer.

The fifth generation of the Eirich mixer was launched in 1972. These mixers feature an inclined rotating mixing pan, a fixed bottom-and-wall scraper, and a high-speed rotating agitator (Fig. 5). Mixers with a capacity of up to 3 m³ are equipped with a single moving tool. In the mixing vessel, the mix is transported upwards by means of wall friction, and then drops back to the bottom as a result of gravity. Assisted by the wall scraper, the mix is fed to the high-speed rotating agitator (Fig. 7). Every revolution of the mixing vessel, which takes mere seconds, results in a 100% circulation of the mix. In the process, the agitator can be operated at circumferential speeds of between 2 m/s und 30 m/s. Higher speeds are tantamount to a higher power input resulting, for example, in shorter mixing times or higher mix qualities.

Today, Eirich mixers are primarily used for special concretes, such as concrete for roof tiles, facing concrete, concrete for railroad sleepers, foam concrete, fiber-reinforced concrete, high-performance concrete and ultra-high performance concrete. Independent studies conducted on facing concrete show that Eirich mixers produce excellent, uniform mixing results [9]. In the production of high-quality facing concrete, Eirich mixers pay for themselves quickly due to a significant reduction in the reject rate. Surface defects are significantly reduced, and more uniform strength values are achieved across the board. For core concrete, Eirich used to recommend “simple” mixers until a few years ago. But here, too, there is an increasing quality awareness. Several concrete products manufacturers have switched to Eirich mixers for the production of core concrete [10]. High mixing quality and homogeneity are important features also for railroad sleepers. One manufacturer uses Eirich products in several plants [11].

The quality requirements for precast elements are increasing, especially since they are frequently produced using fiber-reinforced concrete. This is where another feature of the Eirich mixer comes into play: mixing can continue until the best mixing quality has been achieved without any risk of segregation. Renowned precast producers use the best available mixing technology (Figs. 8 and 9) [12] [13] [14] [15].

The Technical University of Munich has shown that the mixing times of self-compacting concrete can be reduced when using the Eirich mixer [18]. The use of self-compacting concrete in a precast concrete plant in the Netherlands was reported as early as 2001, with batch times of 3 minutes [19]. The use with high-performance concretes has been recommended by the Technical University of Leipzig [20] [21]. Processing UHPC for the production of drainage gutters was reported in 2013 [22]; producing UHPC-reinforced concrete goods such as curbstones with a facing layer of UHPC was reported in 2015 [23]. The mixer is also capable of processing very stiff concretes intended for extrusion [24]. An important point here is that a high power input is available when necessary, and that the mixer is also capable of kneading the material. Eirich always welcomes quality-conscious new customers who have previously used mixers of other manufacturers for the production of facing concrete [25], or customers who have decided to use an Eirich mixer in the mixing tower of another mixer supplier [26] [27].

Eirich mixers are in operation as research mixers at numerous universities today, used to record the mixing work and log the mixing process [28] [29], as well as for rheological measurements [30]. 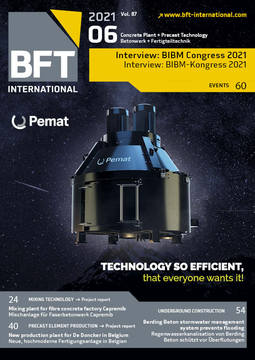 The FIFA World Cup tournament got underway on June 11th. The event is taking place this year for the first time on African soil. The stadium where the first game is being played is the largest in...