The new city hall ensemble in the center of Korbach in the State of Hesse in Germany was recently completed following comprehensive restoration and modernization measures. The aesthetic façadeelements of the new main building – made of recycled concrete utilizing demolishing waste from the former existing building – are among the highlights of the project. The project represents a visibly sustainable, resource-preserving and trendsetting concept that, on the one hand, does justice to the contemplated urban-mining objectives and at the same time reflects the desire of the client to emphasize the historic location of the city hall with contemporary references as an identity building site.

The architects had planned the new city hall complex in three partial projects: rehabilitation of the historic city hall as well as new construction of the main building and of the adjacent building. The design was essentially based on “continued building of the site.” The intention was to consistently continue not only the evolved medieval urban layout with its structure, but also its roof landscape. By including the listed historic city hall, urban spatial references were to be strengthened, and free spaces developed in new quality. Against this background, the newbuilds, in terms of scale and cubic volume, were to be oriented to the existing surrounds and to be interpreted with an independent architectural expression.

In order to visually connect the new buildings of the ensemble and to integrate them in the evolved historic city, the planners of the joint venture ARGE agn – Heimspiel Architekten (from Ibbenbüren, Germany) developed a holistic material concept from the architectural themes of the site.  As an impression of a representative city hall that is open to everyone, architects envisaged a light and high-quality façade of variously structured architectural concrete surfaces. The architectural impression of the building was planned to be characterized by a powerful and differentiated volume. The result: planar elements are in a suspenseful interaction with the deep incisions of arcades and city loggia. The materials follow this theme as well. In their threefold division, they reduce the visual volume and reflect the inner structure of the building. The chosen typical building depths guarantee at the same time great flexibility of use for the staff working for the city.

The façade, moreover, is a clearly visible sign for the urban-mining concept on which the project is based that is aimed at making use of the “urban mine” from the existing annex to the city hall, planned for demolition. Using part of the recycled material also for the façade had been planned from the very beginning. In this way it was possible to make visible the recycled concrete as a valuable component part of a consistent materials cycle to all and, at the same time, to transport the history of the site and the predecessor building from the 1970s into the future.

The architects planned the façade as a ventilated curtain wall construction with precast elements. In its coloring and craftsmanship, the new façade was intended to orient itself to the regional zechstein of the historic city hall and, in this way, to communicate value and longevity. Following several samplings of various recycled materials and concretes, the responsible planners decided to use, among others, a red brick rubble – mined from the roof tiles of one of the demolished ancillary buildings. With this recycled aggregate, parts of the gravel and crushed natural stone contained in the concrete were likewise substituted. The materials were processed in accordance with the specifications of the guideline “Concrete with recycled aggregate” of the German Committee for Reinforced Concrete. This guideline enables the use of both crushed scrap concrete as well as masonry and brick rubble.

Specific formula for the recycled concrete

Accordingly, part of the materials, following selective reconversion and sort-pure separation in a crushing plant, were screened, washed, conditioned and finally delivered to the company Hering Bau in Burbach for use in the new façade.

With this recycled aggregate of type 1 – i.e., concrete chips, with particle size 8/16 – it was possible to substitute 25 % of the natural aggregate. The red brick from the historic building, which gave the concrete a reddish tint, was the major colored constituent of this material. In developing a suitable concrete formula, it is important to use, if possible, only recycled material classified in a safe alkali-reactivity class. Otherwise, the constituent material would have to be classified in E III-S of the alkali guideline and the cement content restricted to a max. of 350 kg/m³. But to be quite sure, this limit value was observed for the concrete used. As cement grade, Portland cement CEM I 42.5 R was used, which enabled a concrete strength class of C30/37. The consistency of the concrete was adjusted to be relatively soft, for purposes of process engineering, which corresponds to consistency class F3. This concrete is therefore ideally suitable for production of high-quality façade elements in the precasting plant.

Before the recycled material and the R concrete could be used, extended initial type testing was required. Among others, it was necessary to determine the water absorption of the recycled aggregate, and to use the results for calculation of the mix – since this should not exceed 10 %. The recycled concrete was prewetted before the actual mixing process to ensure good workability. In addition, it was required to extensively test the R concrete for its resistance to frost. A testing laboratory provided evidence following testing of samples that had been subjected to a specific number of freeze-thaw tests in the precasting plant. This was followed by determining the loss of mass of the test samples and compared with the standard specified limit values. With the concrete formula developed by Hering Bau, is was possible to reliably conform to all limit values for resistance to frost. In conclusion it can be stated: the R concrete used in the Korbach project and processed in the precasting plant was unproblematic and did not significantly differ from conventional concrete.

For the façades for the two new buildings of the city hall ensemble, a total of 260 precast elements were required. For manufacture of the panels, a total of 141 element plans had to be drawn – individually in accordance with all the required data for production of the respective precast element. The elements were designed for a thickness of 14 cm and with maximum weights of up to 7.2 tons for application as ventilated curtain façades. The elements were fixed on the unfinished buildings using façade panel anchors and dowels. An important detail was the execution of the horizontal joints between the façade elements. These were provided with a slope and a raised edge to ensure that the water, even in cases of driving rain, would be safely discharged to the outside.

The precast elements of R concrete were manufactured in the plant of Hering Bau on tilting tables that could be moved into the vertical position for lifting the elements. The steel tables were covered with varnished plywood sheets to obtain uniform concrete surfaces of high quality. The edge formwork – likewise manufactured of wood materials – were abutted against the front sides of the plywood sheets. This ensured dimensionally stable and tight forms.

The elements were stripped and lifted out of the form following a curing time of approx. 20 hours. They were then placed in intermediate storage for about one week before surface processing started. Here, specialists from Hering Bau exposed the red brick rubble by sandblasting the surface. The result: the brick fragments appear as red dots – similar to freckles – on the surface of the concrete and provide it with a unique design. Finally, following application of a water repellent, the precast elements were placed in outdoor intermediate storage until erection.

The panels were transported to the construction site on so-called inloaders. These special-purpose vehicles enable gentle transport, since the panel-form building components can be transported on these vehicles in upright position. The wall elements are firmly fixed onto the vehicle chassis by use of bolts and bracing to hold them securely in place and to reduce stress during transport. The vehicles are fitted with special inloader pallets on which the precast elements can be temporarily parked on the construction site until erection directly from the pallet, without requiring intermediate storage. Since spatial conditions on the site in Korbach are very limited, the elements were positioned by stationary tower cranes.

A true pioneering project for sustainable building with recycled concrete –visible to everyone who looks at the façade.

The complete article, including the accompanying technical paper by Prof. Dr.-Ing. Anja Rosen on the same project “Ressourcen schonen – aber wie? Modellprojekt Rathaus Korbach/D” - Preserving resources – but how? Model project for Korbach city hall in Germany – appears in the yearbook “BetonBauteile Jahrbuch 2022”, available from the Profil bookstore of Bauverlag. 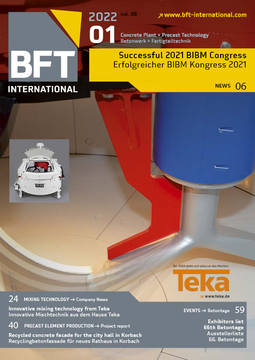 The town hall of Korbach has been a central and characteristic point of contact for the towns citizens for many decades. As the existing building added to the historic town hall in the 1970s was...

Retail is at the very heart of the use concept developed for the Stadtquartier NeuerMarkt (NeuerMarkt city quarter) in Neumarkt/Oberpfalz that comprises 13,100 m² of shopping facilities. This new...

Cemex Deutschland AG is supplying approximately 3,800 m² of ready-mixed concrete to Campus Nord of the Humboldt University in Berlin. The awarding authority, the Senate Department for Urban...

Densification of urban spaces as well as increasing removal and reinstatement activities in recent years have until now resulted in a considerable increase of mineral waste. Such work in...