In September 2013, Assyx exhibited at Bauma Africa, which for the first time took place in Midrand, Johannesburg, South Africa. The German manufacturer of production boards for the precast concrete industry started its market penetration drive in Africa already in 2007.

Bosun Brick, situated in Midrand, only ten minutes from the exhibition ground, was Assyx’s first customer in South Africa. Now Assyx was very happy to supply Bosun again with DuroBoards for the company’s expansion in 2013.

Assyx managing director Alfred Rochlus visited Bosun at its factory site in Midrand. Herman Jonker of Bosun confirmed that the DuroBoards delivered by Assyx in 2007 are still running well and that they will continue to do so for many years to come.

The African market and particularly the South-African market are slowly reviving. Since 2012 Assyx is again delivering its boards to different African countries. Only a couple of weeks ago, the German company delivered DuroBoards to Tanzania. 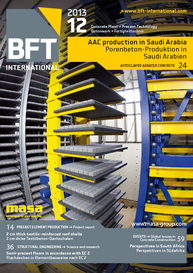 In 2016, the German company Assyx will participate for the fourth time already at Bauma in Munich and present its Assyx DuroBoard production board. In this same year, Assyx will also celebrate its...

Messe München International is expanding its portfolio for the construction machinery sector with the launch of a new event in South Africa. The first bauma Africa takes place in September 2013 in...

Examination of production boards used in the manufacture of concrete blocks