The RMCC replaces the old, far too small Rhein-Main-Halle Convention Center. It was designed by Frankfurt-based architect Ferdinand Heide. His design was selected as the winning entry of the preceding competition, not least thanks to its open, transparent arrangement that heavily relies on the influence of daylight. An intriguing interplay of transparency incorporating structured, open and dividing elements lends an air of lightness and a striking appearance to this large building complex.

Combined with the flexible room design and functional concept, the unique architecture of this new congress and event venue provides the perfect backdrop for events of any type. Separate access points and facilities make it possible to hold events simultaneously, which again proves the exceedingly flexible design approach.

Concrete as a core structural element

Pilasters and walls are dressed in natural stone, more specifically a Turkish travertine variety, which contrasts with the sand-blasted precast architectural concrete components. These consist of white concrete to which aggregates in a matching shade were added (Cramberg silica gravel). Additional surface roughing got the appearance of precast elements very close to that of natural stone. A total of 374 precast units were produced at the Nordhausen plant of P.V. Betonfertigteilwerke GmbH headquartered in Hanau. The range of precast components included columns, beams, curtain façade panels, and parapets. Taken together, 605 m³ of concrete and 52 tonnes of reinforcing steel were required for these elements, all of which conform to architectural concrete class SB 4 (white, sand-blasted). Since on-site storage space was extremely limited, all units had to be delivered just in time with only a minimal buffer period of about three to five hours. Accordingly, a number of critical issues had to be resolved at the precast element design, production, transport, and assembly stages, for instance to ensure a uniform blasting pattern across elements in different concreting positions and thicknesses. Other critical points that needed to be closely monitored included column cracking and edge stresses occurring in the 20 tonne elements when they were turned, which was necessary during loading and unloading onto/from inloader trailers as part of the logistics system chosen for transport and storage. Furthermore, edge spalling had to be prevented when lifting the precast units into a vertical position. These challenges were overcome only because of the close alignment of production processes with the assembly technology and design specifications.

As outlined above, the colonnades set in front of the building create a link to the surrounding urban space. This is why concrete was also used as a key design element of the RMCC outdoor facilities, including cast stone slab pavements. The manufacturer of these slabs, Rinn Beton- und Naturstein GmbH & Co. KG based in Heuchelheim, had to develop a pavement that would blend in harmoniously with the façade panels made from Turkish shell limestone. The Rinn project team got inspired by this stone variety with its natural variations in color, structure, and surface texture and developed bright slabs in different shades and variously treated surfaces in the laboratory. The design team then elaborated a number of laying patterns. In the next step, Rinn used Dyckerhoff white cement to manufacture the custom product resulting from this exercise in its climate-neutral production facility. The finished product was named “Modell rmcc Wiesbaden” and delivered to the job site, where about 6,600 m² of 50 × 30 × 12 cm slabs and approximately 2.400 m² of 50 × 30 × 8 cm slabs were installed – each of the two sizes in six different colors and surface designs. Furthermore, 550 linear meters of matching fliers were laid, which were also produced on the basis of white cement. To further enhance the effect of the façade, water reservoirs were incorporated in front of the RMCC to provide reflections of the respective portion of the façade. Seating areas were integrated around the water areas for visitors to stop and relax.

Stangl AG, a precast producer based in Waldkraiburg, manufactured the solid custom precast elements that enclose the flower beds. Overall, 485 of these units weighing up to 5 tonnes were produced using Dyckerhoff white cement and yellow granite aggregates with a maximum size of 8 mm, and installed on the job site. Subsequent gentle acid washing lends a fine, sandy texture to their surface, thus once again demonstrating how harmoniously the outdoor facilities blend in with the other surfaces of the building – very much in line with the designer’s ambition …

You can read the complete text in the Beton Bauteile 2019 yearbook (see below). 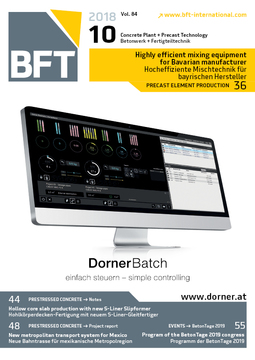 Cast stone is a deliberately used design element which is very difficult to replace in architecture as well as in garden and landscape construction. In projects, where purposeful use is made of its...

Studio Stuttgart at the Edwin-Scharff-Haus in Neu-Ulm was filled to the last seat when Martin Möllmann, Board Member of Info-b, opened this years Cast Stone Podium. He presented the audience...