Schindler GmbH has entered into an exclusive partnership agreement with Ocem, based in Florence, Italy. Effective immediately, concrete slab manufacturers will be able to purchase Ocem hermetic presses as well as the complete range of spare and wear parts directly from Schindler. This partnership covers Germany, Austria, the Czech Republic, Denmark, Sweden, Norway, the Netherlands, Hungary, and Slovakia. All customers will benefit from combining the Ocem range of machines with the unrivaled field service provided by Schindler. Short delivery times and the many years of combined expertise of the two partners will ensure production of high-quality slabs and high machine availability.

Ocem SrL is one of the global market leaders for hermetic presses, which are known for their reliability, robustness, and short cycle times. A wide range of Ocem machines – from laboratory-scale to large industrial presses with a weight of up to 1,480 tonnes – are currently in service at concrete slab production facilities throughout the world. Furthermore, Ocem supplies a variety of press attachments, including dosing units, top layer distributors, and hoppers.

Schindler and Ocem join forces at bauma for the first time

Since 1978, Schindler GmbH has been supplying a wide range of solutions to the concrete and natural stone industries. Until recently, the company has been managed by Berthilde and Horst Schindler. At the beginning of this year, Werner Groß and Richard Scheuerlein Jr. took over management responsibilities at Schindler. Werner Groß, in particular, looks back to 25 years of experience in the concrete slab industry, and is well-known to all Ocem press customers.

The new partnership with Ocem puts Schindler in a good position to supply the concrete industry not only with new machines and assembly and programming services but also with original Ocem spare and wear parts, such as mold sets, wear frames, punches and dies. In addition, Schindler offers used machines and servicing of machines supplied by other manufacturers. In the natural stone industry, the company has earned a solid reputation as a supplier of small machines and Bellinzoni care products.

“For the first time, Schindler GmbH will appear as an Ocem partner at this year’s bauma trade show in Munich. We look forward to welcoming both long-standing and new customers to the Ocem stand in Hall C1,” says Werner Groß. Schindler will be showcasing the new Ocem quick-change system for dosing units as well as a 1,400 tonne press designed for both one- and two-shift production. This press is equipped with the innovative slew drive, which requires less servicing and maintenance while allowing shorter cycle times. 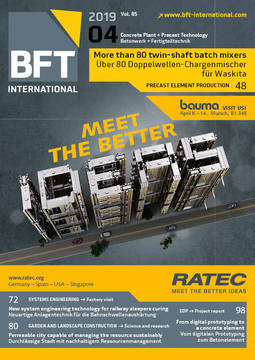 The members of the Top-Werk Partner organization (Germany) work together to supply innovative plant and machinery for concrete products to be used in residential and commercial construction, as well...

more
Issue 2010-09 Something Small from Something

In-house exhibition: Live demonstrations of a printing process, and more

From 14 to 16 July, the company SR Schindler Maschinen- und Anlagentechnik GmbH opened its shop floor for an in-house exhibition  a tradition by now in the German city of Regensburg. For three event...