To develop new ideas and meet the increasing demands of concrete quality, Beton- und Naturstein GmbH & Co. KG has installed a Pemat mixer of the very latest standards. After a comparison of renowned mixer manufacturers the Planetary Mixer PMPM 500 Multimix from Pemat Mischtechnik GmbH was chosen. Ultimately, the decision in favour of the PMPM 500 Multimix was based on the very successful mixing tests carried out at Rinn’s establishment. With its many different properties, concrete places high demands on mixing techniques: Fast homogenization with high reproducibility and efficiency whilst minimising build up - tasks which the PMPM Multimix was made for.

Through its special structure a new generation of mixers is born. The PMPM Multimix planetary mixer differs in basic technical details from conventional planetary mixers. For instance, the speeds of the rotor and whirler apparatus can be infinitely regulated independently of each other through a patented precision gearbox. Another special feature of the whirler is its selectable direction of rotation. Frequency Inverters (Variable Speed Drives) together with a recipe-based control system provide individual adjustment of the whirler and rotor speeds. A further development stage is the evaluation of vibration and wear conditions through sensors within the transmission. This helps with early identification of preventative maintenance and minimises potential downtime through routine maintenance.

In the mixing process, the new Multimix technology has an extremely positive effect, especially with the addition of the individual components. Optimal results of each individual mixing phase such as filling, dry mixing, water dosing, admixture, wet mix and emptying can be achieved by controlling the speed and direction of the mixing tools. These advances combined with the recently developed mixing tools have a positive effect on contamination, build-up and wear.

Rinn produces high quality products with equally high quality surface finishes. The resulting necessary fine supplements, aggregates and cements would normally tend to agglomerate due to the high concentration of fine material. The Multimix technology introduces consistently high energy into the mix causing the fine materials to be quickly and effectively distributed which is an absolute necessity for high quality products. Admixtures and colours are becoming ever more specialised and require more intensive mixing. Due to the large speed range and the variable direction of the whirler, a complete breakdown of the lumps in the concrete is achieved, reducing the number of rejects to a minimum.

Pemat’s new development of the mixing tools is a further step in the mixing technology. Through the study of material flow a significant reduction in the mixing and discharge times was achieved. Small mixes of the highest quality and uniform consistency are easily achievable through the freely selectable rotor and whirler speeds and the resulting mechanical possibilities. The mixer is also ideally suited for the production of high-quality concrete, selfcompacting concrete (SCC) and ultra-high performance concrete (UHPC).

The qualities of concrete and thus the demands on the mixer have increased significantly in recent years and will continue to do so. With their new PMPM Multimix mixer, Pemat has taken the right step into the future for customers in the concrete industry. 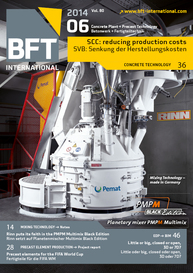 The Otto Quast Company can look back on a successful 70-year company history and produces premium quality pre-fabricated concrete parts for buildings and civil engineering in efficient processes at...

Ring-pan mixers from Liebherr have been successfully in operation in concrete plants for many years worldwide. The new RIV 2.5 D ring-pan mixer raises the standards for production of high-quality...