He is among the best-known personalities in the precast concrete component industry: Richard Bayer. He was able to celebrate his 70th birthday in his Swabian home town of Blaubeuren in May. For many of his long-time friends and business partners, it was a welcome occasion to fittingly commemorate Richard Bayer’s life’s work.

The R. Bayer-Gruppe is among the most renowned manufacturers of artificial stone and terrazzo in Germany. Richard Bayer has managed the third generation of the company, which was established in 1911, since 1977. Production takes place at three locations; Blaubeuren, Zwickau and Berlin. For many years, the companies of the R. Bayer-Gruppe have been considered specialists when the use of artificial stone and terrazzo in contemporary architecture is involved. The range of products includes especially the production of monolithic Terraplan floors with a modern, exposed concrete look. The company is equally famous for its prefabricated, self-supporting and aesthetically ambitious stairs in modern high-performance concretes.

But Richard Bayer was also a volunteer in association work for many years. He was among the founding members of the Artificial Stone Information Association (Info-b) established in 1976 and has been at its summit as chairman since 2013. Raw materials suppliers, manufacturers and processors of artificial stone work closely and confidentially together here in a smoothly functioning industry network and conduct artificial stone industry marketing. Furthermore, as senior guild master, he is also chairman of the Württemberg artificial stone guild and board member of the Beton- und Fertigteilwerke Baden-Württemberg e.V. professional association. 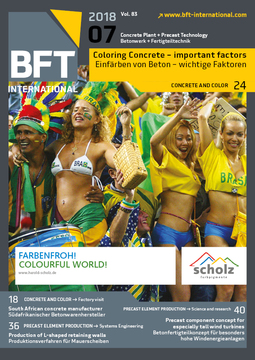 Mid May, the members of the German Information Association for Cast Stone (Info-b - Informationsgesellschaft Betonwerkstein e.V.) met in Bensheim an der Bergstraße, a city in Hesse/Germany, for their...

The eight-story building housing the chancery of the German Embassy in Paris on Avenue Franklin D. Roosevelt was built from 1960 to 1963 as a reinforced-concrete frame structure. It was completely...

On 21 April 2016, info-b, founded in Wiesbaden as the Information Association for German Cast Stone  Informationsgemeinschaft deutscher Betonwerkstein  will celebrate its 40th anniversary. The...