The duration and effectiveness of a construction procedure can be positively influenced in advance by logistics processes. Optimal planning includes the use of precast construction elements. They can effectively be delivered quickly and within an accurate time window, ready for installation, and in accordance with legal regulations applying to transpor by road.

Inloaders, which are commonly used for transporting concrete elements, offer a much more varied spectrum of use and, thanks to their special technical features, are able to support more than just logistics proc-esses in construction. Already during production, they also solve the problem of storage of the precast elements. Immediately following completion, the elements are placed on pallets, so-called flats, and can be stored safely and with savings of space.

The dimensions of the cargo are considerable. Without exceeding legal restrictions, the maximum possible length of the elements that can be accommodated lies at around 10 m. The height of the cargo allowed by road traffic regulations, compared to other vehicles, is notably higher. It can be up to 3.70 m, without requiring special permission.

Simple and economical with manpower

Another advantage is that loading, as well as securing the cargo, can be handled within a few minutes by just one person, and that no additional resources are required.

The procedure is very simple: the rear door is opened by the driver, the inloader is lowered to ground level and moved backwards and below the already completely loaded pallet. As soon as the pallet has been accepted by the cargo shaft of the inloader, the truck is raised, the door is closed, and the loading process is completed.

Certified securement of the load

Another important aspect is securing the cargo. The inloader has been certified by the German certification agency TÜV-Nord in accordance with VDI guideline 2700. The precast elements are tied down by either mechanically or hydraulically operated fastening elements, depending on the features of the vehicle.

The same procedure takes place in reverse at the unloading site: releasing the fastening elements, opening the rear door, and lowering the inloader. This is followed by moving the semi-trailer forward, which positions the cargo precisely where the precast elements are required.

This concept has another advantage at the unloading site: A standard vehicle must wait for unloading, takes up space, and forces the workers and equipment at the construction site to primarily concern themselves with unloading. In contrast, the flat with the precast elements stands exactly where the parts are needed.

Whereas the productive working time of standard vehicle drivers is reduced by waiting for unloading, the driver of an inloader can immediately leave the unloading area. His time behind the wheel is put to optimal use, and the restricted space at the erection site is not occupied by a stationary vehicle.

That is an immense advantage at inner-city construction sites. Delivery of the flats, can also be timed to take place at night, since no personnel, except the driver, is needed for loading and unloading. This also applies to collecting the unloaded flats. 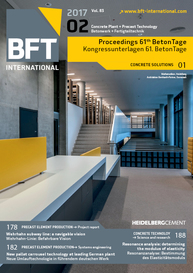 Winding streets, narrow access ways, and barely room for maneuvering  inner-city areas are often difficult to negotiate for drivers and haulers when accessing construction sites. In response to...

Faymonville has been able to establish itself down under for a long time. Low-bed trailers and platform trailers from Belgium can be seen both in the outbacks and in the urban regions of...

Alsace is one of the key areas for transporting precast elements. The region is home to several manufacturers  among them the highly regarded and internationally renowned company Fehr. The elements...

As a transit country, Germany has the highest traffic density in Europe. Routine police checks of cargo secured on trucks frequently raise the issue of whether such cargo has been secured and fastened...

The almost indestructible concrete inside loaders (flatliners) of Langendorf are driving all over Europe, Asia, the USA and Australia carrying out a tough job between concrete plant and construction...