In December 2013, the most modern production line for bubble decks in Mexico was commissioned in the northern part of Mexico City. Danstek, the precast producer, decided to contract Weckenmann, the Swabian equipment manufacturer, with supplying the machinery and production lines for the new precast facility. From the very early project stages to commissioning, Danstek placed great trust in the long-standing expertise and premium quality provided by the German precast experts.

Fachadas Prefabricadas S.A. is a long-established, family-run business that started out as a small precast plant in 1970. Since then, the company has been producing precast elements using conventional methods and processes at its stationary facility. After a period of continuous growth, the business currently operates four precast plants. It has become a leader in the Mexican market for precast architectural concrete facades. The company manufactures a wide array of precast structures and elements, ranging from conventional precast elements to self-supporting parametric facades in a propeller-like design.

The Mexican Barona family (father and sons) are managing three businesses on a single site. The precast company Fapresa is headed by Francisco Barona Mariscal. Danstek is managed by Francisco Barona Coghlan, and the Arqme architects’ office by Rafael Barona. Fapresa perfectly combines precast production and construction with a sophisticated architectural culture. This interlinked approach has given rise to many innovative ideas and a large number of major projects built with architectural precast elements in Latin America, including the “Torre Mayor” in Mexico, one of the highest buildings in Latin America, the “Edificio BAF” and the Liverpool Altabrisa shopping mall, as well as the “Senado de la Repblica” and other government buildings. The Mexican company received many national and international awards for these architectonic masterpieces. Fapresa has collaborated with many renowned architects, among them Cesar Pelli, Reichmann International and others. Following a series of projects in the whole of Mexico and in the Caribbean, the company is increasingly attracting the interest of prospective clients outside Latin America. The architects’ firm and the Danstek engineering office provide solutions for designing precast elements, as well as consultancy with respect to the technical feasibility and the most appropriate modular structure of projects.

Demand is growing in Mexico for precast elements as a quick and attractive method to construct premium-quality buildings in a commercially viable manner whilst meeting sophisticated requirements in terms of surface quality, seismic safety, health and safety in the workplace, and quick completion of the final assembly process. This trend prompted Fapresa to increase its production output and to introduce new production processes. In this context, the question arose which of these processes was best-suited to meeting the corporate objectives of enhancing capacity, productivity and market-driven flexibility. These considerations gave rise to the idea of founding Danstek and repositioning the product offering by introducing series-produced precast elements.

The project officially started in January 2013, but had to cope with certain difficulties: The restricted available space and the complex, sloping company site presented a big challenge to the extension of the facility. Furthermore, the project should not obstruct ongoing production. Arqme and Weckenmann joined forces to develop an innovative solution to expand production at the basement level of the existing factory building, which required large-scale excavations of more than 70,000 m³ of soil and extensive slope stabilization activities.

The new production line has an annual capacity of 200,000 m² and focuses on the manufacture of biaxial hollow-core floor units (also referred to as bubble decks). For this purpose, Fapresa established Bubble Deck Mexico as a separate legal entity. Production manager Rodrigo Lomo explains: “Bubble decks show a behavior similar to that of solid flat floors. This makes it possible to combine material and weight savings with an optimized load-bearing effect.” Besides bubble decks, conventional precast floor slabs are also produced in the new building. Custom elements and particularly sophisticated units continue to be manufactured at the nearby Fapresa production site.

Overall, the six new, state-of-the-art production lines installed at Danstek enable the manufacture of 860 m² of floor units per shift. Weckenmann supplied not only the production lines with a total length of several hundred meters but also a modern concrete spreader with integrated hoist drive, a CPO (cleaning, plotting, oiling) unit for quick and easy cleaning, plotting and oiling of the production lines, and a formwork cleaner with its associated latest-generation formwork system. All machines are equipped with integrated transverse travel units to independently move between the individual lines on cross-rails located at the end of the lines, which further increases production efficiency. Another successfully mastered challenge was the relatively low building height.

Confident outlook into the future

The group is confident about its future thanks to the shift from the conventional, exceedingly complex production method to an automated process. Company owner Francisco Barona Coghlan summarizes: “Our new production facility provides us with an even better positioning on the market as we are able to successfully handle major construction projects within shorter periods whilst ensuring top-notch quality. We have never regretted our decision to implement this project ‘Made in Germany’ together with Weckenmann.” 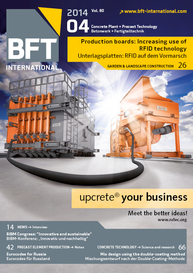 The company Fabcon Precast, based in the USA, is a manufacturer of prestressed façade panels, primarily executed as sandwich construction. For its production facility in Kansas, the company invested...

This combination is capable of processing almost any concrete recipe being applied for manufacturing of precast concrete elements. The concrete discharge is evenly spread and it is possible to place...

Use of lattice girders in reinforced-concrete floor plates is a widely practiced method of construction for conventional high-rise building structures. An estimated 70?% of all floors in these...