The 10th Intermat show closed its doors on 25 April 2015 with visitor numbers of 183,000 recorded during its six days, including 131,624 identified visitors. These numbers are slightly down by 8.5 % compared to those of 2012, a record-breaking year, however the result is particularly satisfying given the complex and uncertain economic climate.

The number of exhibiting companies increased by 5 % to 1,410 with high expectations of this three-yearly event, Intermat 2015 offered an opportunity to prepare for the future thanks to its strong international appeal, particularly in Europe, Middle East and Africa, and its ability to attract high quality visitors with investment projects.

The first ever World of Concrete Europe organised by Intermat 2015 offered a brand new platform to showcase the concrete industry. It attracted 200 upstream and downstream exhibitors and was a highly-anticipated event for the concrete industry as it offered new visitor profiles.

Intermat 2015 offered a great platform from which to launch a number of innovative solutions. More than 100 new products and innovations were presented at stands, the best of which were recognised by the Innovation Awards. 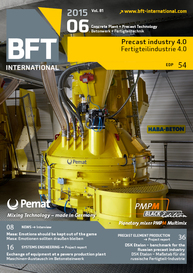 Intermat and WOC to be held in Paris in April

The two trade shows Intermat and World of Concrete Europe will take place in Paris simultaneously for the second time from April 23 to 28, 2018. The venue will be the Parc des Expositions de Paris...

On June 11 and 12, 2015, the Demo Days of the trailer manufacturer attracted guests from 25 countries to the Belgium town of Büllingen near Malmedy. The visitors listened to competently given...

The general economic conditions for the Intermat/World of Concrete Europe exhibition at the end of April in Paris, could hardly have been better  in France, all signals continue to point to growth...