UHPC is a fascinating material; Nanodur E80 concrete, one of the winners of the Innovation Prize 2016, elevates it to the next level. The Nanodur Compound 5941 premixed binder is combined with a specially designed, industrially produced mineral aggregate called Durigid so that this UHPC achieves an E modulus of 80,000 N/mm².

UHPC has been gaining ground in the construction sector only in a gradual process via niche applications such as large, non-reinforced façade panels or custom elements using adhesive connections. However, a new market has recently been established in the field of mechanical engineering due to its self-compacting properties with excellent mechanical characteristics, low-tolerance dimensional stability, very high surface strength, and favorable carbon footprint compared to competing materials. Furthermore, UHPC is easier to produce and provides outstanding vibration damping properties, which increase the speed and precision of machining whilst reducing tool wear. This effect is due to the UHPC’s rigidity, which was again significantly increased in the Nanodur E80 design.

In the construction industry, this material can be used for steps of football stadium stands, columns for high-rise buildings, semi-precast elements for bridges, foundation slabs designed for heavy loads, and composite structures. Its high strength is complemented by defined rigidity, deformation and vibration characteristics to remain competitive compared to steel structures. As a result, the new Nanodur E80 concrete significantly expands the range of possible uses not only in mechanical engineering but also in the precast industry.

In 2008, Dyckerhoff was awarded the Innovation Prize of the Supplier Industry for its Nanodur cement enabling a simple UHPC production process. Back then, the focus of the innovation had been on material engineering aspects. To further simplify the process, all difficult-to-mix constituents were homogenized in a premix comprising 59 % of Nanodur cement and 41 % of fine silica sand. The resulting Nanodur Compound 5941 has been commercially available for a long time; it is supplied as a stable premix in silo trucks and thus enables UHPC production with conventional aggregates and mixing equipment, including gravity mixers. 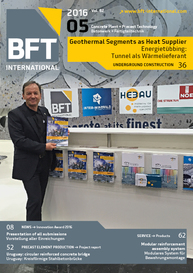 The largest university sports center in Lithuania is located in Kaunas. It is part of the Vytautas Magnus University and was named after Valdas Adamkus, the former President of Lithuania and Honorary...

10 years of Nanodur  under this motto Dyckerhoff had invited to the Nanodur conference 2017 held in Kirchheimbolanden in Palatinate at the beginning of May of this year. Looking back to the more...

The name of Osnabrück-based Pion AG says it all: pion is French for playing piece, and thats exactly what the stylish charging stations for electrical vehicles look like. They have...