This year’s CTT (STT) trade show in Moscow – in fact the most extensive performance showcase for suppliers of the construction industry located in the Commonwealth of Independent States (CIS) – was a sad sight indeed (pp. 12, CTT Moscow: Hope for Improvement). Hardly any visitors were to be seen among the aisles of the exhibition hall. There were also fewer exhibitors – lights were out in the rear of exhibition hall 3, 13, for example, and the outside exhibition area was noticeably smaller.

Low oil prices and the sanctions of the USA and the EU imposed on the government of the Russian President Vladimir Putin are showing their effects. Russia is once again undergoing a crisis. The government lacks the money for implementing the planned investments. And the companies can now obtain loans only with great difficulty.

The consequences are also not likely to be pleasant for European and US American suppliers. The weakness of the ruble consequently makes machines and plant engineering from the West unaffordable for Russian companies at the moment. As a result, “import substitute” is currently the buzzword: supplier materials, for which in the past ten years advanced production capacities were specifically built in Russia, are now being increasingly ordered from Russian manufacturers. For Western manufacturers of machinery and plant engineering, this breather may indeed be only short-lived. Although there has until now been no serious competition from Russian manufacturers in this area – possibly with the exception of a few manufacturers of formwork. However, according to insiders in the industry, manufacturers primarily from Turkey and China are successfully expanding their shares of the Russian market. 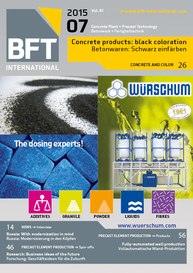 We know the fact from the seaside: At low tide the sea level falls and the way from the deck chair to the water gets longer and longer. The view from the entrance of exhibition hall 3 to the stands of...

That the economic crisis will continue in Russia was a matter of fact for all those who travelled to Moscow for this years CTT trade show. Who had therefore lowered the expectations did not get...

The ConTech 2015 trade show and conference reflected the actual state of affairs on the private market sector of concrete and precast concrete manufacturers in Russia over the past year even more...

The good news is that Russian manufacturers of precast elements and concrete products appear to have largely come to terms with current exchange rates. The unfavorable ruble vs. US dollar (1:56.6 as...

That the economic crisis will continue in Russia was a matter of fact for all those who travelled to Moscow for this year's CTT trade show. Who had therefore lowered the expectations did not get...