Producing the concrete for the new administrative building with particle fractions from the company’s own quarry – for E. Gfrörer & Sohn Schotterwerk GmbH & Co. really be a matter of course – hadn’t it been for the fact that conversion of the tower mixing plant was scheduled to take place nearly at the same time. BHS-Sonthofen proved to be the right partner for this time-sensitive project. The experts for mixing technology replaced two pan mixers that had gotten on in years with a twin-shaft batch mixer, fitted for the first time with speed control with frequency converter built by BHS-Sonthofen. This solution can in particular optimally mix modern formulas with very fine particle fractions.

E. Gfrörer & Sohn Schotterwerk, based in Empfingen in Germany, is an expert when it comes to processing gravel and concrete. The company has been quarrying rock in its own crushed-rock plant in Sulz-Fischingen since 1924 and processes it to various particle sizes. In 1998, Gfrörer invested, in addition, in a plant for production of ready-mixed concrete. In it, the gravels, chips and crushed sands quarried and processed in its own plant could directly flow into concrete production. The new line of business turned out to be a full success. However, this resulted in the two mixers in the mixing tower reaching the end of their service life after a good two decades. New, modern mixing technology was planned to replace the two machines.

Therefore, in August 2019, Gfrörer got together with BHS-Sonthofen to jointly plan the conversion of the plant. The optimal mixer was soon found: a type DKXS 3,33 twin-shaft batch mixer. However, the equipment from BHS placed additional new requirements on Gfrörer and caused it to take a new approach.

Modern concrete formulas are calling for ever greater contents of very fine-grained aggregates. This enables the concrete to better penetrate the steel reinforcement. For mixing technology, however, these fine particles pose a challenge. To guarantee optimal homogeneity for the greatly varying concrete formulas, BHS-Sonthofen decided jointly with Gfrörer to equip the twin-shaft batch mixer with a technical innovation to support the time-tested three-dimensional mixing principle with speed control with frequency converter. Here, the control system enables a change in the rotational speed during the mixing process so that the speed can be optimally adapted to the respective formula.

The additional advantage of the innovation, as Gerd Schuler, a member of the field sales staff at BHS Business Area Construction Machines, explains: “The power supply in this customer’s plant takes place with dual tracking. Gfrörer uses mains power supply and supplements this when required by a generating set. The mixer must be able to handle both power sources, for which the speed control has a stabilizing effect.”

A tight time schedule and a special first task

In early 2020, the time had come: on 13 January, after six months of planning, BHS was able to start with conversion of the plant. The time schedules were strict: Gfrörer wanted to restart concrete production already on 24 February. A delay was out of the question since the first project was to be something very special, as explained by Uwe Gfrörer, Managing Director of the company: “We were in the process of erecting a new administration building. And there was no question that the concrete for the foundation would have to consist of materials from our own quarry, and to be produced with our own mixing plant.”

During the first days of the conversion, the task was to dismantle the existing weighing and mixing technology, including the steel construction. Only the storage silos for the aggregate remained. The newly built weighing platform was fitted with aggregate scales for gravel and sand, a cement scale, a water level, a scale for chemical additions as well as an exhaust air filter. Underneath, the mixing platform was subsequently installed with the new mixer into which all scales discharge. This level is moreover fitted with a high-pressure cleaning system. The discharge of the mixer is controlled by a hydraulic unit placed above it. The mixer discharges via a discharge funnel either directly into the truck mixer or, via an extension, into a funnel for self-collectors. Here, garden landscape builders or private customers can buy smaller quantities of concrete for their own projects.

“Within this tight time schedule, much had to be implemented,” recalls Gerd Schuler. “A certain amount of tension could be felt among all participants.  But we were very well prepared. In fact, the conversion could not have proceeded better. Instead of mixing the first batch of concrete on 24 February, as planned, the plant could be tested already on 19 February. The result convinced everybody immediately, such that it could be used directly for the foundation of the new administration building. By the following Friday, the mixer had already produced a total of 250 m³ of concrete. “The fact that we were able to produce the concrete for the new building with our mixing plant – and this even four days ahead of schedule – I regard of course as an especially successful conclusion of this project,” emphasizes Uwe Gfrörer. BHS, too, is pleased about the successful collaboration: “Since then, this plant virtually never stands still and operates to the operator’s fullest satisfaction,” notes Gerd Schuler in conclusion. 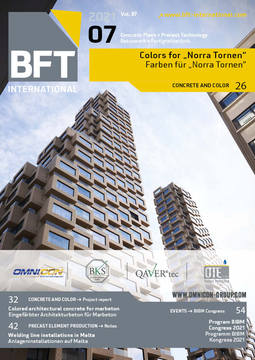