As the President of BIBM, I am new to the BetonTage conference. I am honored to be here and take part in this successful event.

You might think that a new president means a new start and new priorities. But Patrick Declerck, the previous BIBM President, has initiated a five-year strategic plan which is now reaching its mid-term review. Short-term priorities might change, but our long-term strategic priorities will remain the same because these are the pillars of BIBM: to jointly develop the European precast concrete industry, to favorably influence the European regulatory environment, and to promote concrete as the backbone to sustainable construction with precast applications.

However, 2015 has indeed proved to be a new start. BIBM held a successful advocacy event at the beginning of January to present the association to the new European Parliament after the 2014 elections. In the European arena, I am happy to inform you about the recent launch of a new, powerful campaign aiming to promote concrete solutions whilst engaging with European policy makers in discussions in a pro-active manner. This campaign, called “The Concrete Initiative”, is bringing the concrete and cement sectors together. In the course of this year, this initiative will be holding four high-level events with the European Commission and the European Parliament as the target audience.

Thus you can see a change on the horizon: a participatory, “pro-active” attitude toward the European institutions. We come forward with a positive attitude that enables open discussions and delivers real, scientific figures and data in its messages, with the aim to build a reliable, engaging concrete sector. In this spirit, the BIBM, its Board, its representatives and the Secretariat are working together for a brighter future for the European precast concrete industry. 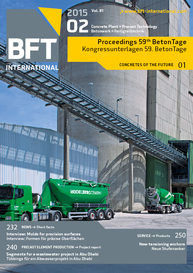 I have the pleasure to welcome you all to this 61st BetonTage edition not only as the president of BIBM, the federation of the European precast concrete industry, but also in my capacity as...

On behalf of BIBM, the Federation of the European Precast Concrete Industry, I welcome all of you to the 63rd BetonTage congress. The role of a European federation such as BIBM is to forecast the...

Save the date: BIBM Congress 2020  precast success in Nordic countries

The BIBM Congress 2020 will take place in Copenhagen  as announced by the congress organizer, the Federation of European Precast Concrete: Bureau International du Béton Manufacturé (BIBM). The...

Lobbying for the precast industry in Brussels

Energy-efficient building and intelligent urban development with a function-oriented infrastructure were the thematic focus of BIBMs Advocacy Event that kicked off the year 2015. The main objective...

One of the main outcomes of the 20th BIBM Congress that took place in Cannes on 16-17 June 2011 was the election of Patrick Declerck (CEO of Decomo  PST Group, Belgium) to the presidency of BIBM,...