On 12 June 2014, the World Cup kicks off in the Brazilian metropolis of Rio de Janeiro. 32 national teams will compete against each other for the Cup and determine who is the World Champion. During the four-week tournament, thousands of fans will cheer their stars in the twelve World Cup stadiums. Millions of viewers worldwide will follow the games on TV in a fever of excitement.

You, dear BFT reader, have the chance to become part of the action yourself: After the 2010 World Cup in South Africa and the EURO 2012 in Poland and the Ukraine, your technical journal BFT International and the companies DSI Dywidag-Systems International, Harold Scholz & Co. GmbH and Wasa GmbH invite you to join the BFT World Cup Tip Game once again. Register on the BFT website, place your bet and be the next BFT Tip Champ! The three participants who scored the most Tip points will get great material prizes.

From 1 May 2014 you can read how it works on the BFT website (www.bft-international.com/wm-tipp). Register and join in the fun! 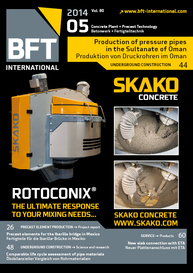 Construction trade fairs are being held now on every corner of the globe. Many of these events are also of special interest to the precast concrete industry  sometimes more, sometimes less. Trade...