Though the properties of the aggregates, the cement types, the mixing water, the admixtures and the additives are specified in standards and indicated to the user; there are no obligatory instructions at all for the process of bringing these constituents together: the mixing of concrete. In this regard, the rules and regulations rely on the gut feeling of the user.

For the mixer, the German standard DIN EN 206-1, for example, only requires a uniform dispersion but not a good dispersion: “9.6.2.3 Mixer: The mixers have to be able to achieve a uniform dispersion of the constituent materials according to their rated mixing capacity within the mixing time as well as a uniform workability of the concrete” [1]. The mixing process itself cannot be verified and is subjective: “9.8 Mixing of concrete: Mixing of the constituent materials is required to be carried out in a mixer conforming to 9.6.2.3 and be continued until the concrete is of uniform appearance” [1]. The standard does not know a definition concerning homogeneity. Therefore, the standard does not require a mixing process to be carried out “well”.

Zement-Merkblatt B7 (Cement Code of Practice B7) (March 2011) of BetonMarketing Deutschland GmbH “Preparation and Processing of Concrete” says “that mixing of the constituent materials has to be carried out in a mechanical mixer and has to be continued until the concrete is of uniform appearance. This period is the mixing time. According to experience, this shall take at least 30 seconds for normal concrete and at least 90 seconds for lightweight concrete. Manual mixing is not allowed. When manufacturing concrete types with special requirements, for example, self-compacting concrete, high-strength concrete, fair-faced concrete or when using air entraining agents longer mixing times may be required” [2].

The Bauglossar (a glossary of building terms) published by Institut für internationale Architektur-Dokumentation GmbH & Co.KG, Munich reads that the indication “30 seconds” only applies to “mixers with an especially good mixing action” [3]:

“Machine mixing: As a rule, mixing of concrete has to be carried out in appropriate mixers. The constituent materials for the concrete measured previously have to be mixed with each other until a uniform mixture has been achieved. A mixing time of less than 30 seconds is considered to be sufficient for mixers with especially good mixing action and for all other mixers at least 60 seconds. When adding concrete admixtures, it is recommended to extend the mixing time considerably because of the smaller quantities added.

Mixing: Fresh concrete is produced by mixing its constituent materials. As a rule and for high-quality concrete, mixing is carried out by a mechanical mixer…“ Size, capacity and assessment of the mixing action are stipulated in DIN 459 Part 1 and 2 [4].

What is a “longer” mixing time? And what happens, if the mixing time is too short or too long? The standards do not give any answer to such questions. Concrete experts often refer to the fact that the mixing process undoubtedly determines the concrete. F. Ferraris (National Institute of Standards and Technology, USA) writes in her paper „Concrete Mixing Methods and Concrete Mixers: State of the Art“ [5]: As for all materials, the performance of concrete is determined by its microstructure. Its microstructure is determined by its composition, its curing conditions, and also by the mixing method and mixer conditions used to process the concrete.

This makes clear that mixing is a far more important factor than frequently deemed to be.

Principles of mixers for concrete

The last comprehensive investigation on this topic was public in 1980. Harald Beitzel first reported on the “influence of the mixing time on the mix quality of concrete” (“Einfluss der Mischdauer auf die Betonmischgüte” [6]). The investigation intended to allow an assessment of concrete mixers according to the quality of the concrete processed and according to the mixing time after which the concrete achieved its optimum value.

The investigation showed that, e.g., using a pan mixer, the optimum result for the water and powder distribution of 500 – 750 liters is achieved at 70s, however only after 30s there are appearances of segregation at medium-size aggregates (2/16) and coarse aggregates (16/22). Beitzel describes similar appearances using trough mixers. According to Beitzel, such segregations are caused by velocity gradients between the inner and outer zone as well as the centrifugal force. Thus, the mixing process is always superimposed by a segregation process (Fig 1).

Apart from segregation, Beitzel reveals other unpleasant things. Both pan mixer and trough mixer show variations in the mix quality in relation to the size of the mixer. Thus, a mixing time of about 70s is considered to be good for the trough mixer to achieve the best powder distribution with filling amounts of 500 to 700 liters, whereas for sizes of 1000 up to 2000 liters the optimum was achieved at 180 seconds. Furthermore, the lack of a consistent mixing action in axial direction, occurring in trough mixers owing to the design, was also expressed.

The comprehensive report “Gesetzmäßigkeiten zur Optimierung von Betonmischern” [7] (principles for the optimization of concrete mixers) was published in 1981. This aimed at indicating the effects of the mix, mixing tools, speeds, processing velocities and mixing time on the mix quality: Why are there different fresh concrete properties, when using differently long mixing times, if the mixer is changed, if the mixer is filled with different volumes, if the mixing tools wear out, etc. The mixing tool speed has a drastic influence on the mix quality (Fig.  2). This explains why normal concrete mixers only run at a slow speed. Finally, it was demonstrated that the mix quality strongly depends on the mixing time. However, after 70s there are “strong appearances of separation within the mix”; even the water distribution in the mix is inhomogeneous (Fig 3).

In 1982, Beitzel then explicitly reported on the “importance of the mixing time“ [8]. Quotation: “The optimum mixing times of the pan mixers vary in the range from 30 to 180 seconds … In particular, among coarse aggregates, the high velocity gradient between inner and outer zone as well as the centrifugal force have a negative impact (separation of coarse and fine aggregates)”. The trough mixers achieve “their optimum mix quality after a mixing time of 30 to 60 seconds”. And in order to perform a “good” mixing result, long mixing would be necessary. This, however, is not possible since then the concrete would segregate.

Why is the Eirich mixer different?

Mixing means, to effect transposition processes in the mix. For this reason, mixers can be divided into two groups:

Transposition process only caused by the mixing tool

problems with friction and wear (frequently with ceramic lining)

therefore only one (slow) speed of about 1.5 m/s

Transposition by means of rotating vessel and tool

subordinate problems with friction and wear (no  ceramic lining necessary)

unlimited number of speeds, up to peripheral speed of 40 m/s (for concretes up to 10 m/s).

The Eirich mixing principle differs substantially from that of other mixers. In a mixer with inclined mixing vessel a 100% of the mix is transported to the mixing tool (agitator) within one revolution of the mixing vessel. This guarantees, on the one hand, mixing without dead zones and, on the other hand, mixing without segregation also when using longer mixing times and higher mixing tool speeds, as these are favoring the disaggregation of pigments and clay lumps in the sand (Fig. 4).

In recent times, several comparative studies on the mix quality have been carried out. In 2002, the IFF Weimar investigated the mix quality of face concrete, namely Eirich mixers in comparison to planetary mixers [9]. The Eirich mixer achieved significantly better results concerning all parameters investigated, as uniformity of the fresh concrete density, the water content, the powder ratio, the solids content 0.125 – 0.25, wear resistance and of the freeze-thaw resistance. The measurement of the color intensity in paving blocks, however, obviously revealed the higher degree of mix quality. While the planetary mixer shows deviations of more than 30 units, the Eirich mixer showed only deviations of about 8 units due to a better pigment disaggregation; as a result, it is possible to reduce the pigment ratio.

The completely different mixing principle of Eirich mixers leads to the fact that almost all restrictions applying to simple mixers are no longer valid when mixing concrete. Thus, it is possible to add water almost as fast as desired, the mixing time is independent of the mixer size, the tool speed can be varied on a large scale, the mixing tools may vary within a wide range and can be adapted to the mix, the mix quality is almost independent of the filling level. Moreover, segregation does not occur with these mixers; to exceed the “optimum mixing time” is impossible. The reason: a 100% circulation of the material during a revolution of the mixing vessel.

The main fields of application of the Eirich mixer are the industry segments foundry (mold material processing), metallurgy (sintering processing) as well as the ceramics industry (e.g. refractory materials with corundum and silicon carbide, catalyst compounds, electrode masses). All these applications require the highest degree of mix quality – the mixer is therefore customized for any of these applications and is never a mixer off the rack. As far as concrete is concerned, using such mixer is in general reasonable for roof tile concrete, face concrete, concrete for railroad sleepers, foamed concrete, fiber-reinforced concrete, high-strength concrete, ultra-high performance concrete, and polymer concrete. Eirich mixers pay off quite quickly for face concrete as the reject rate is declining significantly. Surface defects caused by clay lumps not broken up, sand clusters or pigment smudges will no longer occur. The strength values obtained on a production board are more uniform. According to customer statements, the production of pipes / manhole sections with a near-size particle of 16 mm the amount of water required is reduced by up to 15% allowing reducing the cement amount by 8% without any loss of strength.

On the example of self-compacting concrete, TU Munich revealed that the mixing time of 240s required by a planetary mixer can be reduced to 60s using an Eirich mixer [11]. Here it was advantageous to mix with different speeds (slow – quick – slow). The Eirich mixers also scored obviously in case of high strength and ultra-high performance concretes. Investigations showed that tool speeds of up to 9 m/s are ideal for this purpose [12, 13]. Using a “hybrid mixing process” with different speeds enables mixing concrete, e.g., in half of the time compared to a twin-shaft mixer and moreover reducing the amount of superplasticizers. Besides, Eirich mixers are used at many universities today as laboratory mixer for research purposes including collecting and recording the mixing processes [14].

The compulsory mixers for concrete usual in the market can be divided into two groups. Each group has its qualifications, one for large quantities of standard concrete and the other one for concretes with high quality requirements. 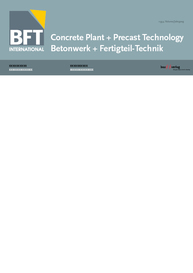 Concrete standards require a mixing process to continue  until the mixture appears homogeneous. This does not establish an objective reproducibility. When manufacturing simple concretes, field...

The quality requirements placed on concrete products  such as pavers, slabs, block steps, palisades or masonry blocks  are increasing continuously. Whereas functionality used to be the only...

The D23 which was presented to the trade public at Bauma 2016 is the latest generation of the D series mixers which have a horizontal mixing pan and rotor. In-formation on initial use of the mixer in...