The functional principle is similar to that of a conventional pumped-storage power station. An artificial cavity with an integrated pump turbine is installed in the seabed as the lowest reservoir, and the surrounding sea is the upper reservoir. The pressure difference between the lower and upper reservoirs corresponds to the head of a conventional pumped-storage power station and correlates with the depth of the water.

Figures 3 and 3a show a schematic presentation of an underwater storage unit, the artificial cavity of which is formed by a hollow concrete sphere.

When energy is required, a valve is opened and water flows into the cavity – which drives the turbine to generate energy. When excess energy is available, the water is pumped out of the cavity against the water pressure. In this manner, the energy storage unit is charged. Electric energy is fed into or removed from the underwater pumped-storage power station via a cable. The equipment unit, including the pump turbine, is attached to the hollow concrete sphere, where it can be removed for maintenance.↓

With or without air supply

An important question that required investigation was to establish whether a pressure compensation pipe leading to the water surface would be required here. This pipe would ensure that the air pressure above the water column in the sphere would always remain at one bar until complete filling. Further investigation determined whether operation of the system without pressure equalization would be possible, and/or what the effects would be: i.e., when inflowing water compresses the air in the sphere. The second variety would be considerably more cost-efficient, since the pipe, which functions like a snorkel, would then not be required. Tests showed that both modes of operation would be possible.

Due to cost structures and technical properties similar to conventional pumped-storage power stations, the StEnSea-Prinzip (StEnSea = STored ENergy in the SEA) can make a significant contribution to solving the energy storage problem. A hollow sphere with an internal diameter of around 28.6 m, installed at a water depth of around 700 m and fitted with a 5‑MW pump turbine would correspond to a storage capacity of 20 MWh.

A discharge cycle is approx. 4 h in duration. Efficiency calculations have shown that intermediate energy storage is possible for around 0.02 euro/kWh [5]. The efficiency of the storage system was calculated by the Fraunhofer IWES (Institute for Wind Energy and Energy System Technology) within the scope of the project, and amounted to 75 % to 80 %:  i.e., similar to that of conventional pumped-storage power stations. If the storage requirement were a multiple of the magnitudes investigated, an extendable storage park with several hollow spheres could be installed (Fig. 3 and 3a). This would also have a positive effect on the cost structures, so that we may assume future installations of storage parks with multiple spheres, similar to wind parks. The StEnSea technology is primarily suitable for locations near a coast. Suitable water depths near coasts can be found worldwide: for example, in the Norwegian Trench with water depths of ...

You can read the complete text in the yearbook “Beton Bauteile 2018” (see right). 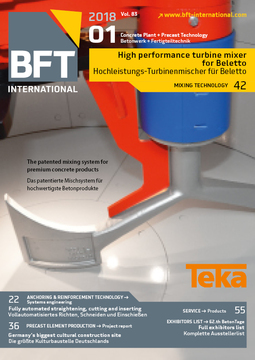 An ancient Chinese proverb says: When the winds of change blow, some people build walls but others build windmills. Max Bögl, too, opted for the second alternative in 2010 to draw from its many...

Following the introduction of the first pump sump to the market a few years ago and with that a practical solution for structures in groundwater made available, the precast plant Hieber...

The year in precast elements

On a hill above Gaildorf, a town located some 60 km north of the German metropolis of Stuttgart, four towers are currently rising into the sky. These are wind power plants that will be combined with a...