According to estimates of the Federal Statistical Office, Germany has a lack of about one million homes. Moreover, many building structures in Germany are old and dilapidated and need to be replaced as soon as possible. Even if, at present, substantial efforts are undertaken on the part of government and industry to react to these drawbacks, new construction is faced with essential problems due to an industry-specific, individual planning and production of building structures, the long construction periods depending on weather conditions, the manual, time-consuming and fault-prone on-site production as well as the high costs associated. The precast concrete industry, with its partially industrial and standardized production of precast parts and elements [1], enables savings in terms of time and money, but often does not allow considering the clients‘ individual requirements on architecture optimally.

3D printing is an additive manufacturing technique that builds three-dimensional components adding layer by layer without formwork. The calculation of the layer structure and the corresponding printing paths are computer controlled using previously defined target geometries. Even through additive manufacturing of structural members is still in the development stage, a distinction between the following concrete printing technologies is possible already now:

In the particle-bed process, thin layers of sand are selectively saturated with a cement-water mixture layer by layer. As soon as the saturated layers are setting, the surplus sand is removed and the finished concrete component is revealed. In contrast to this process, the concrete is mixed in advance when using the extrusion method and the component is printed by depositing small strings of fresh concrete. In the shotcrete process, in turn, the concrete is applied layer by layer as shotcrete. Apart from the actual printing process, the integration of the reinforcement in the concrete printing process, among others, is an object of current research.

In 2016, the Digital Building Fabrication Laboratory (DBFL) at the ITE was put into operation for the digital manufacture of structural members. The DBFL is a DFG-funded major research instrumentation, which is unique in respect of its conception and performance, and is the focus of current research in the field of additive manufacturing at the ITE and iBMB (Fig. 2). The working space of the DBFL is 15 m long and approximately 7 m wide, with a height of up to 3 m. A 6-axis industrial robot, connected to a 3-axis portal machine, is the additive manufacturing unit of the DBFL. The robot has a load-carrying capacity of 150 kg, can move about freely in the entire working space, and can be provided with different end effectors (e.g., spray nozzle, welding apparatus, etc.) depending on the production process. The DBFL comprises another portal machine that is equipped with a 5-axis, CNC-controlled milling and sawing attachment. The CNC portal machine is the subtractive manufacturing unit of the DBFL which was also developed for the processing of hard and abrasive materials such as ultra-high performance concrete, for example. A wide range of applications is covered by combining the flexibility of the robot with the rigidity of the milling and sawing unit. Both units can be controlled separately as well as synchronously. The synchronous gear allows for setting up complex process chains consisting of additive and subtractive manufacturing steps.

Columns are structural members with essential importance for the structural safety regarding their integrity and dimensional accuracy, while requiring a high expenditure in manufacturing simultaneously. The iBMB has gained extensive experiences concerning columns, among others, made from

The shotcrete used was „Emcefix-Spachtel G extra“, a polymer-modified, microfiber-reinforced fine-grained concrete made by MC Bauchemie, with a maximum grain size of 2.0 mm. The fine-grained shotcrete was pre-mixed in a compulsory mixer according to the instruction of the manufacturer and then conveyed by a screw pump through a hose up to the nozzle of the spraying device, where it was accelerated by means of compressed air. An accelerator was added to the concrete stream via the compressed air in order to control the setting behavior of the fine-grained concrete.

Because of the prefabricated reinforcement cages, it was not possible to lead the spraying nozzle at a right angle to the horizontal, as in case of the non-reinforced concrete columns. In addition, the concrete printing process had to be carried out in such a way that (hardly) any spray shadow occurred. Based on extensive preliminary investigations and process simulations regarding possible guidance of the spray nozzles, the reinforcement cage was finally fixed by means of two shuttering boards on an electrically driven rotary plate and the spraying nozzle that is inclined to the horizontal by 60° was led from the bottom to the top along the rotating reinforcement cage. During the printing process, the rotary plate was operated at a rotational speed of 0.1 m/s. The series of photos shown in Figure 6 clearly demonstrates that the production of reinforced concrete columns could be realized with this method quite well.

In addition, systematic investigations on the performance of the 3D printed columns have been planned to allow for comparison with conventionally manufactured reinforced concrete columns. These investigations intend to ensure a robust and repeatable production process which will be integrated in an automated assembly line production, thus leading to an economic and practical application in building and enabling fast and individual construction in the future. 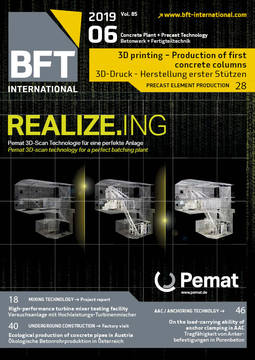 3D concrete printing as an additive manufacturing method (AM) is a pioneering technology that will significantly accelerate construction process industrialization. The concrete is built up layer by...

more
Issue 2020-02 Testing and analysis of the structural behavior

Additive manufacture (AM) and/or 3D printing with concrete represents a highly innovative and future-oriented production technology for the construction industry. For one, linkage with modern...

Additive manufacturing (AM) is a technology that opens up the potential to completely rethink the process of producing concrete components. In contrast, the conventional method involves the pouring of...

Additive Manufacturing (3D printing) has the potential of becoming an automated production technology tailored to the individual requirements of the construction industry. The basic principle of...