The call from Dr. Thomas Kranzler, managing director of Syspro-Gruppe Betonbauteile e. V., was as spontaneous as it was good news to the BFT editor-in-chief: “We have been invited by our Belgian member company, the Kerkstoel Group, to visit their new precast concrete plant. If you have time, we could go to Flanders as early as next week, and report on our visit in the BFT magazine!” No sooner said than done – and our expectations were not only met but exceeded by far: Belgian precast producer Kerkstoel 2000+ has created a true highlight in the industrial series production of architecturally ambitious precast concrete elements.

A wide variety of precast concrete elements manufactured by the Kerkstoel Group can be found in modern residential and office buildings as well as in shopping malls, railroad stations and airports. In order to continue setting new trends, the Belgian specialist in construction materials based in Grobbendonk near Antwerp invested in a new solid, double and thermal wall manufacturing line for versatile building component geometries and customized designs about two years ago. This allows concrete elements of varying degrees of complexity to be produced within the same period of time while maintaining plant productivity.

The Kerkstoel family has been active in the construction industry for over 100 years: Leonard Kerkstoel started out as a contractor in 1902; his son, Florent Kerkstoel, began manufacturing and trading in construction materials in 1935. His son, Michel Kerkstoel, started producing concrete near the Albert Canal in the Flemish town of Grobbendonk in 1965. The family has been investing in precast concrete production ever since. At the end of the 1980s, one of the world’s first industrial series production plants for precast slabs was built using manufacturing technology supplied by German plant manufacturer Vollert. 1997 marked the company’s first steps into double wall production primarily for modern residential and industrial construction.

Today, the company is managed by CEO Pascal Kerkstoel and is considered a pioneer and driver of innovation in outstanding precast concrete architecture. “This ranges from the Ericsson headquarters in Zaventem and the Eurostation II central station in Brussels to the Court of Justice building in Antwerp – all of them architectural highlights”, says Pascal Kerkstoel, not without pride. And indeed, many architectural landmark buildings and real estate projects in the Benelux countries were realized using precast elements “made in Grobbendonk”. Today, the concrete elements are supplied to clients in Belgium, Germany, France, Great Britain, Luxembourg and the Netherlands.

Ultra-modern precast plant is built in 2019

Pascal Kerkstoel is convinced that “stagnation always means regression”. Today, walls, floor slabs or façade components are not only much more diverse in terms of architecture, designs or surface qualities but also require more comprehensive work contents, more embedded parts or special integrated functions. At the same time, the capacities required for construction projects are increasing and cost pressure is rising in order to be able to remain competitive in the race for clients and orders. These developments are a major challenge for numerous precast producers. “Since we also kept receiving an increasing number of customer inquiries for double and solid wall elements with complex building component geometries and oversized wall surfaces of up to 3.80 m, we decided in 2018 to invest in a further state-of-the-art precast concrete production line. The initial contact with the suppliers was made at the end of 2018 during the Engineering Days in Vienna, and production was in full swing again in the now paperless ‘smart factory’ after only two years. Today, we are talking about what is certainly the biggest investment in our history to date.”

The plant concept and layout were designed by Prilhofer Consulting as an independent consulting firm. Once all of the plant and performance requirements had been defined, a specification document was created for each element of the machine technology. Based on these, Kerkstoel 2000+ and Prilhofer Consulting issued an invitation to tender for the plant technology, and concrete plant specialist Vollert, together with RIB SAA Software Engineering and its local partner, UBO Engineering, came up as the successful bidders. Prilhofer Consulting also took care of the detailed design and project management, which was closely coordinated with the project team from Vollert. The goal was to realize up to 500,000 m² of concrete wall and floor surfaces per year on a given floor space of 4,880 m².

Since the end of 2019, double walls of premium quality have been produced for several prestigious construction projects in the greater Antwerp area but also in the other Benelux countries. Special customer designs or special concrete elements can now be produced simultaneously, as can large series for major construction projects. “Technology, a great deal of expertise, highest quality and absolute adherence to schedules, that is what our customers can continue to rely on,” explains Pascal Kerkstoel in view of the continued growth of the long-established family business and pioneer in precast production.

“We are still a family-owned company, and we try to translate that into everything we do. This extends from a flat organizational structure and short decision-making channels all the way to our core values: involvement, accessibility and reliability. Kerkstoel also wants to be known for innovations, for example, the thermally activated floor slabs we produce or the high-precision cutting of insulation materials by means of robots,” Pascal Kerkstoel continues.

“We are also not afraid of the future – as a result of the labor shortage on construction sites, there is a high demand in general for precast concrete elements. We expect these to remain a key element of tomorrow’s construction sector, and we are convinced that modularity and circularity will become ever more important as the focus turns to durable solutions. In addition, new concrete mixes will find their way into precast production as a result of carbon taxation. Speaking of concrete mixes: all we need now is a new mixing plant, and this will be installed and commissioned within the next few months. Details will follow at a later date.”

When asked by the BFT editor-in-chief whether the new plant had been designed as a multi-story building also for reasons of prestige, Kerkstoel 2000+ managing director Kurt Guldentops, who gave the visitors a tour of the production facility, couldn’t help smiling: “This may certainly be an interesting side effect, but we have virtually made a virtue out of necessity. As the site for the new plant between the Albert Canal and E313 motorway was relatively small and could not be extended, the design needed to include several mezzanines and levels.”

Dr. Thomas Kranzler, as mentioned before, the managing director of Syspro-Gruppe Betonbauteile e. V. who initiated the visit, was also full of praise: “For the BFT team, and for me personally, looking over the rim of the proverbial tea cup is, of course, immensely important. Being the only member of the Syspro-Gruppe based in Belgium, Kerkstoel provides new stimuli and perspectives that will also benefit our other member companies from Germany, Austria and Italy. Production on as many as five levels is an extraordinary sight even for Silvio Schade and myself, who have seen the inside of numerous precast plants. So, once again, thank you very much for inviting us.”

Dr. Kranzler concluded: “When I was appointed as the new managing director of Syspro in 2020, I promised our members that, in addition to the development and realization of technical innovations, my essential focus would be on shifting the focus of architects and designers to the Syspro quality brand with regard to energy-efficient construction – and the Kerkstoel Group is a prime example of that.” 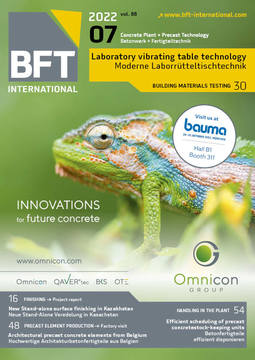 Suction cups for an efficient double-wall production in Belgium

2017 WU Code of Practice of DAfStb

The content of the lecture is the position paper of the German Association for Concrete Components with Lattice Girders (BmG), the Bavaria Double Wall Quality Association and the Syspro Group...

Confidence dominated when the precasters in the Syspro-Gruppe Betonbauteile celebrated their 30th anniversary. In Berlin, in May, Syspro Chairman of the Executive Board Matthias Schurig and Managing...

Kerkstoel 2000+ and Vollert in collaboration with Prilhofer Consulting have created a highlight in industrial series production of demanding architectural precast concrete elements in Belgium. A wide...