The rehabilitation of railway bridges is generally focusing on one central objective: In order to reduce disruptions of the rail traffic to a minimum, the line closures, during which the rail traffic has to cease, have to be reduced to a minimum. In conventional construction, concrete placement and displacement of the structural components takes place on site. This frequently requires complex temporary supporting systems and auxiliary structures. Project engineers, time and again, are therefore searching for feasible alternative solutions to reduce the construction period. A good solution was found with the replacement construction of the railway bridge close to the Grottenkamp stop in Steinfurt-Borkhorst. In this case, instead of using cast-in-situ construction, the engineers opted for using precast reinforced-concrete box culverts, thus reducing the number of track possessions considerably.

DB Regio operates passenger trains on the Münster-Enschede railway line. In the course of the regular maintenance checks, the facility and project management of DB Netz AG decided to renew an old railway bridge crossing a pedestrian and cycle path near Steinfurt in the north-west region of NRW completely. A planning approach stipulated to manufacture the new reinforced-concrete semi-frames on site and to shift them from a lateral position into their subsequent final position by lateral displacement. According to the engineers, this would have required several track possessions: In the first one, the temporary supporting system had to be erected. In the second, the railway track would have been dismounted and an auxiliary bridge spanning over the construction pit would have been erected. Finally, in the third track possession, the semi-frames manufactured on site would have been pushed into place and the auxiliary bridge dismantled again. In order to reduce the track possessions, another possibility was searched for actively.

One instead of three track possessions

Jan Reiker of DB Netz AG stated on the project: „The building contractor suggested an alternative solution for which only one track possession was required during the entire construction period.“ According to this, the complete structure, other than the original in-situ-concrete solution, would be delivered within only ten hours as a construction set of precast components for assembly at the construction site. At the construction site, a heavy mobile crane was used to install a total of 17 structural components with a maximum width of 4.80 m, a maximum length of 8.25 m and an individual weight of up to 50 tons, delivered by Kleihues Betonbauteile GmbH & Co. KG located in Emsbüren, Germany. After installation, the sections were glued with a two-component epoxy resin mortar, tensioned with each other and force-locked for installation in their final position. A bar post-tensioning system of type 32 WR was used for tensioning of the precast elements.

No need for auxiliary bridges and temporary supporting systems

„A big advantage of this construction method is the fact that, immediately after the installation of the precast elements, we could start backfilling and placing the tracks again. All steps could be carried out immediately after each other. Therefore, we did not need complex auxiliary bridges and temporary supporting systems. In this way, we were able to reduce the line closure,“ Jan Reiker continued.

Dipl.-Ing. Paul-Martin Großkopff, General Manager of the Kleihues precaster, mentions another advantage of precast concrete construction: „Precast components are manufactured under monitored conditions and are subject to ongoing quality control in the factory. In comparison to the conventional method, often a much better concrete quality is achieved in this way, moreover, offering advantages in its visual appearance. The reduction of working steps, associated with this construction method, also leads to a simplification of the entire project and a reduction of possible error sources.“ Jan Riekers confirms: „The method as a whole is a very clean solution which not only technically works faultlessly but also has a nice visual appearance.“

The rehabilitation of the building structure was carried out by the construction company Albert Fischer GmbH located in Elze, being supported by an assembly team of Kleihues on October 22, 2019. Trains could already run over the bridge again shortly after the end of the track possession time. More information at www.kleihues-beton.de. 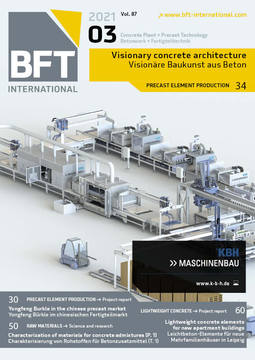 Where underpasses under rail lines must be constructed or renewed, developers as a rule, aim to reduce track possession to a minimum. These are the times during which rail traffic must be blocked, and...

The narrow underpass in Östingstraße had long been a thorn in the flesh of the authorities of the city of Hamm. In the absence of a separate path, pedestrians and cyclists were exposed to great...

Stringent requirements for bridge structures due to rising traffic volumes, accompanied by the age structure of bridges in Germany, are calling for fast construction of new and replacement structures....