The long initial stage up to the 2022 FIFA World Cup and the new alignment of the master plan „Qatar National Vision 2030“ encouraging investments into the future of the country gave rise to more doubts regarding the fact whether the optimism of the last years was realistic at all. Projects such as the new international airport of Doha scheduled to open these days, the currently large number of infrastructure contracts and the huge new port project of Doha show that the State of Qatar really wants to make a difference.

The existing port in the center of the city is regarded as the greatest bottleneck to an economic development of the country. Once the new port being four times larger is completed, Qatar will finally be in the position to meet its obligations to provide the stadiums, hotels and infrastructure FIFA requires for the 2022 World Cup. The annual cargo handling capacity will then be equivalent to 6 million 20ft. containers.

„The government wants this project to become one of the major projects in the Gulf region,“ says Khalid Ali, project manager of Fahad Bin Abdulla Ready Mix (FBA, see p. 10 of „The Fahad Bin Abdullah Group of Companies“). FBA is a sub-contractor responsible for supplying and casting of 4 million cubic meters of concrete.

On the area near the coast, the 2 m high blocks are properly positioned in rank and file. Each block has a „nose“ at the top and a corresponding recess at the bottom enabling the wall to be erected like a large Lego construction. The hollow spaces are filled with spoil.

A batching plant comprising two Sany 180 Eco units is mixing the concrete for the blocks. From 2014, it will also supply the concrete required for the construction of the football area „Doha Stadium“.

Belt conveyor instead of a pump

The blocks are manufactured in individual molds. For this purpose, FBA applies the Telebelt of Putzmeister for the first time in Qatar. Four TBS 130 are used in total at the construction site. The machine made in the USA and Germany ideally fits for this job because it uses a belt conveyor instead of a pump for the placing of concrete. Bulk concrete that is not pumpable can also be placed efficiently and fast in this way. The conveying capacity adds up to 275 m³ concrete per hour.

Once the Telebelt has been put into operation, its advantages soon become obvious. The ready mix trucks arrive in convoy and alternate without interruption just requiring a short set-up time at the feeding hopper. The Telebelt is operated by means of a radio remote control similar to a concrete pump.

Concrete placement is always concerned with fastness. The Telebelt fills the formwork quickly. Directly at the installation site, the concreting team provides for as consistent hardening of the concrete as possible. If a block is finished, the conveyor belt moves 180 degree to an empty form at the opposite side and the concreting process starts again. 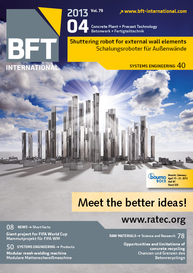 Through the desert sand of the Middle East

For the Faymonville Group, the Middle East has been a white spot on the map for a long time, mainly because the Group had focused on building up networks in such regions as, for example, Eastern...

Fiber-reinforced concrete panels for the desert

Desert rose made of concrete - National Museum of Qatar

The involvement of the Arabian culture is consistent throughout the entire building designed by the French star architect, Jean Nouvel, who was awarded with the 2008 Pritzker Prize, that is often...