One hundred years after manufacturing the Ur-Leica (first original Leica) in the German city of Wetzlar, the company now returns to its original location. In the newly designed Leitz-Park, the three-piece building complex of the Frankfurt-based architects Gruber + Kleine-Kraneburg complements two already existing fair-faced concrete buildings. From this year on, the new production and administration building of Leica Camera AG provides visitors and photo enthusiasts from all over the world insights in the past, the present and the future of photography.

In the second construction stage, the Frankfurt-based architects Gruber + Kleine-Kraneburg, who won a limited competition, realized the headquarters of the company internationally operating in the optical industry. Since 2009, this architectural office has already built the corporate buildings of Weller Feinwerktechnik GmbH and ViaOptic GmbH in the newly designed Leitz-Park. With the three-building complex of the new world of Leica it was now possible to create an architectural link to the two already existing fair-faced concrete buildings.

In the style
of objective lenses

The architects constructed the building exactly according to the company’s requirements, thus dividing the complex into a dominant entrance hall and a rear section. Based on the shape of an objective lens, they designed the front buildings facing the square as a concave-convex complex, with one building structure having a layout that resembles an eight and another building being built on a circular floor space. On the left hand side of the main entrance there is the cafeteria on the first floor, providing space for nearly 700 people; the right side leads to the Leica store.

The glass-roofed foyer looks like a central connecting element, accommodating the museum with the Ur-Leica as well as a gallery providing space for changing photo exhibitions. The service center whose outline corresponds to the segment of a circle can be reached by customers from the foyer or the store. The attached production facility is spatially divided into the fields of manufacture of objectives, assembly of objectives and assembly of cameras. Transparency was important for the client as well as providing the visitors with an unobscured view to the production, even if exposure to light has a negative impact on the production of the sensitive precision devices, which even has to be free of air particles.

On the first floor, the architects met this challenge by means of a circumferential corridor furnished with a 250-m-long glazing of story height. Furthermore, panels made of precast concrete elements are attached around the punctuated façade. “The acid-treated surface of the concrete colored in a cold shade of gray looks like soft velvet, so that the façade appears in certain lightness,” says architect Martin Gruber describing the project.

In mid-2009, the decision taken in favor of the Leitz-Park already set the course for the return of the company to the original location. Highlight of the activities, for the time being, is the opening ceremony of the production and administration building made of reinforced-concrete which was passed over by the consortium Lupp/Dressler/Imtech ready for occupation. Heidelberger Beton GmbH supplied more than 15,000 m³ of concrete from the nearby Niederkleen factory. Steel fibers were used for reinforcing the solid ground slab, and geothermal energy generated by concrete core activation is utilized for heating and air conditioning.

The precast concrete façade elements integrally colored gray were manufactured by Dressler Bau GmbH located in Stockstadt. A team of temporarily up to 300 people erected the new building within nearly 19 months. “It was fun although the building entailed many challenges,” remembers one of the site managers. “Work preparations were already quite complicated, because half of the buildings are circular, therefore works were time-consuming from surveying to formwork.” A particular highlight inside the building is the large spiral staircase, rising from the customer care center upwards to the development department. The stair with a flight width of two meters is rested on six supports and according to site manager Fleischer “poured with concrete in a corkscrew-like manner.” Balustrades made of concrete frame the staircase, constructing them even required customized formwork. 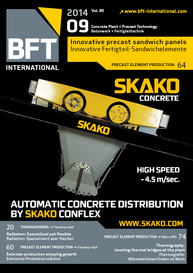 Dressler Bau GmbH, from Aschaffenburg, can look back on over 100 years company history. The development of the precast component factory in Stockstadt has seen EIRICH involved from the very start:...

The material of choice

The new Tyrol Department Store in Innsbruck opened its doors at the beginning of March. If one believes the press releases, the choice of material for the façade was an essential element for the star...

An acropolis in the middle of Berlin

The Museum Island was woken from a long sleep when the inner-German border was opened in 1989. A new entrance and reception building was needed to accommodate the approximately 4 million annual...

Either of these projects is in the focus of the general public, and opinions strongly diverge even within the architectural community. Quite a number of proponents of the reconstruction of the Berlin...

Italian architect Renzo Piano has designed a 202 million euro bridge for his hometown of Genoa, after the old bridge collapsed in a storm. In a statement Piano said it was a "great honor" to design...