The precast concrete manufacturer Voronezhsky DSK is one of the largest companies in southern Russia and is among the market leaders in its field. They have enjoyed an annual increase in contracts of around 15 percent since 1997. Since the company was established in 1968 it has built a total of approximately 8.2 million square metres of living space.

In June 2012, the executive board decided to have the production facilities overhauled and expanded. The aim is to increase the quality of the final products and, for example, to meet international standards in sound and thermal insulation. The technology and know-how for this major project Voronezhsky DSK acquired from a single source, from Weckenmann.

State of the art plant ­modernization

It started with the modernisation activities in August 2012. The Weckenmann supervisor joined a complete pallet circulation system, a mixing plant, five battery moulds and two bucket conveyors on the trip to southern Russia. Together with the skilled workers on site, they handled the entire refitting and upgrade of the factory – including training. “The project had a colossal amount of work,” recalls the Weckenmann project manager Wadim Grünwald. However, with the common goal in mind, they have successfully met all the requirements as a team. And this in a relatively short time: From the signing of the contract through the design, production and assembly to delivery and commissioning only one and a half years were needed.

The circulation system, on which facades are manufactured as sandwich elements, among other, consists of a computer-controlled plotter, two concrete distributors, shuttering and demoulding cranes for the formwork system, the formwork transport, pallet cleaner or pallet lubricator and tilting station. A mixing plant, bucket conveyors and battery moulds complete the installation. The latter are characterised by their temperature and vibration monitoring and the specific concrete distributor which fills the chambers quickly and economically. Due to the high level of automation of the complete plant, the production process could be significantly accelerated. Another plus: Measuring errors are eliminated from the outset.

With this investment Voronezhsky DSK has consolidated its position as a market leader and can now look forward to the increasing demand for precast concrete products for the Russian housing industry with confidence.

Wadim Grünwald, Project Manager Weckenmann Anlagentechnik, said: “An immense amount of work needed to be done for project. We managed to stay on track with the very tight timeline through close and trusting cooperation of both project partners.”

Valeriy Dmitriev, Assistant General Production Manager, added: “With the modernization we have secured our advantage over the competition. Now we can look forward to all future demands in the Russian housing industry.”

Igor Tonschev, Project Manager Voronezhsky DSK, finished: “Through the excellent cooperation with the Weckenmann team we were able to successfully carry out the project in a very tight timeline.” 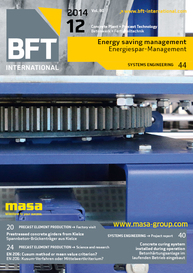 The fdu group of companies comprising 19 factories in Germany is one of the largest manufacturers of precast concrete elements all over the world. Throughout Germany, fdu GmbH & Co. KG is supplying...

After more than 5 years as head of the design and development department, the managing partners Hermann and Wolfgang Weckenmann appointed Martin Schatz (48) as another member of the management team of...

New Head of Sales at Weckenmann

Thomas Klett has been the new Head of Sales at Weckenmann Anlagentechnik GmbH & Co. KG since April 1st and in this role, he is responsible for the sales and marketing of the plant manufacturer. The...

The plant engineering company Weckenmann GmbH & Co. KG, based in the German federal state of Baden-Wurttemberg, is investing around 3.2 million euros in the extension of its location in Saxony-Anhalt,...