For the first time, BFT INTERNATIONAL offered guided tours through the exhibition halls. Relevant topics had been determined before in order to attract interested attendees from among the industry audience and to adhere to the set timeline. As a result, the companies participating in this offering had the opportunity to present themselves and their products. Here, too, the “fly ash” incident had a tangible impact. Nonetheless, both attendees and companies showed great interest so that BFT is determined to offer guided tours also in the future.

The exhibitors’ statements collected by BFT editorial staff at trade show reflect the information in the final report provided by the organizer. According to this report, some exhibitors had closed more deals than originally expected already half-way through the event.

With a total exhibition space of 555,000 m², which was fully booked, and a 60% share of international exhibitors, new all-time highs were attained as regards the total num­ber of exhibitors, involvement of international exhibitors and space occupancy. Over 415,000 visitors from more than 200 countries attended bauma 2010. Compared to the previous event held in 2007, this translates into a 17% decline. “However, as we are witnessing the reversing trend that bauma 2010 has triggered for the industry on a global scale, we are very optimistic with a view to bauma China 2010 to be held in Shanghai, which has been fully booked already. By the same token, the increasing interest in the new event bC India 2011 in Mumbai has resulted in a signifi­cant expansion of the originally planned exhibition space,” says Klaus Dittrich, Chairman of Messe München GmbH.

In keeping with the three-year interval, the 30th edition of bauma will be held from 15 to 21 April 2013 in Munich. 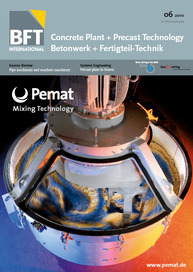 Bauma China 2012 will take place in Shanghai at the premises of the Shanghai New International Expo Centre (SNIEC) from November 27 to 30. Since the very first show, the Federal Republic of Germany...

After the official entry deadline for the registration forms for the Exhibitor bauma 2010, the Fair Munich GmbH, is looking forward for next years tradeshow. The exhibitors from all product branches...

bauma 2010 facts and figures According to the latest plans, there will be space to accommodate more than 3,000 exhibitors at the 2010 event. The higher capacity comes from the provision of extra space...

Bauma Conexpo Africa will move to new premises: The next edition of the international trade fair for construction machinery, building material machines, mining machines and construction vehicles will...