The Big 5 started on a high, with the official opening by HH Sheikh Hamdan bin Rashid Al Maktoum, Deputy Ruler of Dubai and Minister of Finance and Industry.  Over 3,000 exhibitors from 52 countries showcased their latest products and services.

The positive vibe on the exhibition floor was supported by the speakers at The Big 5 Conference, who concluded that the Middle East is still the key region for the global construction industry, and is in better shape going forward than the rest of the world.

The environment was an overarching theme for The Big 5 this year. Visitors also enjoyed the unique JCB dancing diggers show, and were impressed with the giant “Big 5” logo constructed by children from HorizonSchool from over 40,000 LEGO bricks.

Paula Al Chami, The Big 5 Event Director said, “Widely regarded as barometer of the construction industry, many people were waiting to see what would happen at this year’s The Big 5. We were delighted with the success of the show, which was beyond all expectations – it was particularly exceptional given the economic slowdown of the past year.

“The show halls were buzzing, and exhibitors were impressed with the quality of visitors we attracted this year.  It was also great news that there were some announcements made during the event of significant contracts.  This bodes well for the regional construction industry in the future, and we are now looking forward to next year’s event!”

This year, for the first time, BFT INTERNATIONAL organized a guided tour of the trade fair. The participants of the BDB professional study trip had the opportunity to discuss with various international suppliers of the precast concrete industry accompanied by the editor-in-chief Andrea Janzen. The participants of the journey were quite interested in the current situation of the economy in the UAE, in the financing of various major projects and in joint ventures. The majority of the exhibitors interviewed confirmed that there is immense demand for co-operations in those region. 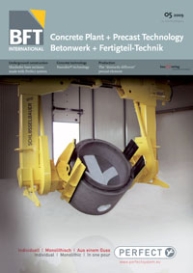 The Big 5 took place at the Dubai WorldTrade Center from November 17 to 20, 2014. According to information provided by the organizer, about 2,800 exhibitors from 61 countries came together at the...