On February 26, 2020, the managing director and shareholder of Paul Maschinenfabrik GmbH & Co. KG (Dürmentingen/Germany), Werner Paul died unexpectedly at the age of 67.

Werner Paul, the grandson of the company founder Max Paul, studied industrial engineering and computer science at the University of Karlsruhe and joined the company in 1976. During all his life, he was significantly involved and masterminded numerous new and further developments. Hence, for example, the recently introduced measuring and data logging system for TTC stressing jacks, based on an Android table, was conceived by him.

In 1985, Werner Paul joined the management board, and at that time, he also laid the foundation for electronic data collection and data processing. For decades, he had dedicated his energy, intelligence, inventive talent and willpower to the successful and stable development of the company. He drove the company forward in international competition and was able to create and maintain secure jobs in the region. He had significantly contributed to the fact that the name Paul has become an established brand in the prestressed concrete industry. The company, looking already back to 95 years of company history, has a workforce of about 300 people today.

„On the one hand, being deeply depressed by the sudden loss of Werner Paul, we are glad, on the other hand, that he was able to pass his knowledge to the next generation during the last few years. In this way, ordinary business operations can be continued without any restrictions in the future,“ state managing director Barbara Hering and his son Maximilian Paul. 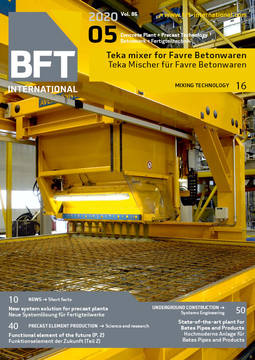 Change of agency in Brazil

Paul Maschinenfabrik GmbH & Co. KG - a leading manufacturer of technology for the prestressed concrete sector - headquartered in the German city of Dürmentingen will be represented on the Brazilian...

Rolf Ovesiek, long-time Managing Director at Masa GmbH, will go into retirement on December 31, 2018. His professional biography is closely linked to Masa. After leaving school, Ovesiek began his...

90 years of progress and tradition in mechanical engineering

Paul Maschinenfabrik GmbH & Co. KG celebrates its 90th anniversary this year. What in 1925 began as a metalworking shop evolved long ago into an internationally active company in the three business...