The company a+b Asphalt- und Betonmischwerke GmbH & Co. KG is a corporate group with five concrete plants in the German cities of Biberach, Ingoldingen, Ochsenhausen, Aulendorf and Bad Waldsee – as well as an asphalt, gravel and gravel processing plant in Ingoldingen. The company a+b was founded in 1970 by regional construction and gravel companies and, accordingly, is in its 50th anniversary year.

The a+b Group currently employs a total workforce of around 110 and operates a truck fleet with an average of 60 vehicles. The customer base consists primarily of companies from the building, underground and road construction sectors. In addition, a+b offers services in the areas of concrete pumps, asphalt mills as well as sweeping machines. The group furthermore operates a concrete plant in Otterwisch near Leipzig, as a wholly owned subsidiary.

As a company with deep roots in Upper Swabia (in southwest Germany), a+b prefers to place its investments with well-established regional partners such as the company Kniele, which delivers solid quality and, thanks to short decision-making channels, guarantees fast and smooth project execution at the Biberach location.

Initial planning of the conversion measures began in late 2018. Conversion of the existing mixing plant started in April of 2019. The first step was downward dismantling of the two existing mixers and mounting of the new ring-pan intensive mixer in the supporting scaffolding.

This mixer has been designed to deliver a homogenous mix quality and is primarily used for production of ready-mixed concrete. Its two independent agitators counter-rotate with respect to the main agitator. During rotation, the mix is moved through a narrow mixing channel, resulting in very thorough blending. This also makes it possible to mix small quantities. The installation of ceramic plates on the mixer bottom ensures maximum service life of the mixer.

The automatic high-pressure mix cleaner enables fast cleaning. The mixer deduster sucks up the dust that has accumulated during filling of the mixer with aggregates and, especially, with cement. This also makes it possible to visually monitor the mixing process from the monitor-based workstation.

The concrete mixer discharges vertically down through a valve into the transfer hopper and directly into the truck mixers, which subsequently deliver the fresh concrete to a+b construction sites.

The capacity of the concrete plant was increased by replacing both 2m³ mixers with a 2.5m³ mixer, which fills the truck mixer with only three mixes (instead of four).

In connection with the conversion measures, a new control system from the company Simma Electronics from Austria was likewise installed.

CONTACT
Kniele GmbH
Gemeindebeunden 6
88422 Bad Buchau/Germany
+49 7582 9303-0
info@kniele.de:info@kniele.de%3C/a%3E">
www.kniele.de
Delivery scope:
· Ring-pan intensive mixer ZE 2500/3750
- Discharge up to 2.5 m³ hardened concrete
- With two rotating mechanically driven agitators
- Ceramic lining for high stability
· Mixer camera for monitoring the mixing process
· Compulsory mixer with suction device, which sucks up the accumulating dust in the mixing chamber, preventing pollution of the mixing chamber and at the same time ensuring that the mix can be monitored by the camera during mixing
· Automatic high-pressure cleaning with 4 rotating cleaning heads
· New supporting structure on the existing mixing tower onto which the new ring-pan mixer was mounted
· Scales control unit for the existing aggregate scales was retrofitted
- for daily control calibration of the scales by means of test weight
· Increase of the existing cement scales for a larger cement weight
+ scales control unit
· New spirit level
· Start of conversion in April 2019
· 2 existing pan-type mixers without agitators
This article appeared in 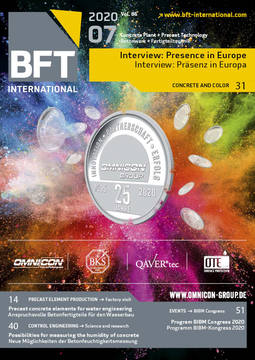 With the Kniele cone mixer, a completely new approach has been taken. This patented cone mixer, according to the manufacturer, has qualities in a class of its own. Owing to innovative technology, KKM...