For many applications, for example in the manufacture of concrete roofing tiles or spacers, the engineering company Maschinenfabrik Gustav Eirich GmbH & Co. KG can draw on several decades of experience.

The fine-grained concrete used for small-extruded precast parts has a stiff-plastic consistency. To ensure that the extruded workpieces possess sufficient cohesion, plasticizers such as plastic fibers are added to the concrete. The homogenous distribution of the plasticizer and the defined separation of fibers, which are often entangled or matted with each other, regularly confront concrete mixers with a major challenge. Sometimes the mixing tools run too slowly because they must transport the material in the mixing pan. Excessive speeds can lead to excessive wear of the tools and the lining of the mixing pan – as well as to segregation.

In processing fine-grained concretes of any consistency, with or without the addition of fibers, the Eirich mixer, according to the company’s own statement, has great system-inherent advantages. The new mixing system is an advanced development of the ring-trough and planetary mixer, whereby a revolving pan transports the material to be processed to the mixing tools.

Experiments in the technical center in Hardheim

In combination with a stationary material deflector on the mixing pan wall, an intensive three-dimensional materials flow takes place.

A special feature is that the mixing tools can run at any desired speed up to 30 m/s, in or against the direction of drum rotation. The power input into the mix can thus be specifically adapted to the relevant process and the specific requirements.

Depending on the geometry and speed of the rotor, input of very high specific mix energies (> 10 kW/100 kg) into the mix is possible. The generally occurring counter-running movement of mixing pan and rotor tools generates high-speed differences, together with correspondingly high shear forces. As a result, the Eirich mixer is also ideally suited for processing very stiff concretes with added fibers. The functional principle of the rotating mixing pan, rotor and material deflector ensures complete agitation of the material in the mixing pan. Dead zones are prevented because every partial volume of the mix is fed to the mixing tools. This also reliably prevents segregation in the mixer itself.

The tests performed in the test center in Hardheim regularly demonstrate very good mix results to interested visitors, especially as regards fiber separation. For production, Eirich can deliver complete plant engineering in addition to the mixers (conveyor, batching and weighing system, and plant control). Table feeders – used by Eirich in many other sectors – enable material feed from one batch process (mixing) to a continuous process (here, extrusion.). 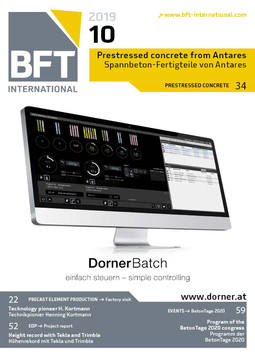 The process steps mixing, granulating, kneading or dispersing are in many sectors the production stages that determine the quality. On this subject, Maschinenfabrik Gustav Eirich offers one-day free...

This year Maschinenfabrik Gustav Eirich GmbH & Co KG is celebrating the 150th anniversary of its founding in 1863. Eirich is a family-run enterprise which enjoys the full support of its employees and,...

The Eirich Group, with Maschinenfabrik Gustav Eirich as its strategic headquarters in Hardheim, has been market leader in mixing and processing technology all over the world for almost 160 years now....