Since its founding in 1958, Northern Concrete Pipe Inc., has been producing frame profiles, catch containers, restraint systems, oil separators and other precast components in addition to concrete pipes and manholes. Two cage welding machines from the German company mbk Maschinenbau GmbH have already been used successfully for many years at the plant in Grand Rapids, Michigan.

Two motor-driven wire-winding reels for coils of up to 3 metric tonnes in weight, in combination with a double wire guide up to the welding point, allow either the stocking of two different wire diameters or, with identical wire diameters, the direct continuation of production if one of the coils is empty. 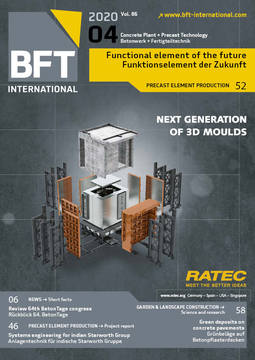 Automation is the future for the concrete pipe industry

It is always about being just the one step ahead: having solutions already at hand when a market signals that the times demand something new. With BSM, mbk has an innovative cage-welding machine in...

The mechanical engineering company MBK Maschinenbau GmbH, based in the German city of Kisslegg, has developed since its founding in 1961 into one of the leading manufacturers of welding machines and...

Dance of the rebars at Finger Beton

At the production site of Finger Beton Sonneborn GmbH & Co. KG a new fully-automated cage welding machine of type VTA 160, designed and constructed by Progress Maschinen & Automation, was put into...