Planning and coordination are the solution

KBH has taken into account the relevant technical and safety aspects, as well as the economic issues, and has developed a Mold Inspection and Repair Station.

By using this equipment, the machine operators can confidently expect that thry can re-use a mold unit without difficulty, and that production can be resumed without significant interruption.

The first generation of the Mold Inspection and Repair Station permitted only swinging the lower mold part into different positions.

Advantages of the second generation

The second generation of the Mold Inspection and Repair Station now also permits swinging the upper mold part into different positions. The swiveling of the mold parts takes place by means of a spindle that powers the special design versions of the gear mechanisms. To facilitate the work of the maintenance personnel, the swivel gear can also be powered by a cordless screwdriver.

“Major customers in Europe and the USA appreciate the advantages of this machine – a cool tool that makes the plant personnel’s job easy, prolongs the mold lifetime and assures the greatest possible production availability of their plant”, concludes Alwin Bennmann. 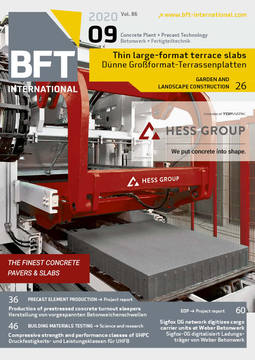 Issue 2011-10 Molds for hollow blocks of the latest generation

The system was presented to an international audience at bauma 2010. In the meantime, this new patent of Rampf has revolutionized the production of concrete blocks - experts are highly impressed. In...

Guideline: Repair of building structures made of concrete and reinforced concrete

A continuous further development of rules and regulations made it necessary to update the guideline for  Maintenance and repair of buildings structures made of concrete and reinforced concrete of...

more
Issue 2014-02 Is maintenance part of the selected concept?

As is the case for any building or structure, the design, construction and operation of a parking facility must respond to the specifications and requirements (needs) of the client/user [1]. It is...