Last year’s Big 5, the biggest construction show of the Middle East, reported impressive record figures that made you forget the crises years of 2009 and 2010. With 74,474 attendees, this is an increase of 19.5 % over the results of the previous year. In a completely booked out WorldTrade Center, 2,742 exhibitors from 57 countries means an increase of 13.5 %. The internationality of the exhibitor community is 80 %, since export-oriented companies from all over the world want to do business in the Arabic countries.

The Big 5 Dubai takes place
from 17 to 20 November

In an exhibitors questionnaire, the quality of visitors is rated as very good. The numerous parallel events, such as, for example, congresses, conferences, seminars, workshops, and live presentations, also contribute to the quality of visitors. According to the organizer, the upcoming Big 5, which takes place from 17 to 20 November and opens its gates from 11.00 a.m. to 7.00 pm every day, will have a comprehensive accompanying program as well. For exhibitors it will be difficult to obtain larger exhibition space or to apply for new ones, since the fair grounds were booked to capacity already last year and a further increase of the demand is expected. The World TradeCenter is building a new hall, which, however, will be completed only for the Big 5 in two years from now. This could lead to bottlenecks in the requests for space, since inquiries from Asian countries, Russia and Turkey in particular arrive in increasing numbers. At this year’s event, there will not only be two, but three German group stands and the exhibitors will be positioned in the right halls and be better geared to the appropriate target groups.

The deep trust that is placed in the breathtaking development of the region is further encouraged by the state mega projects and social infrastructure programs that were announced. A market report of April of this year published by Ventures Middle East estimates that the upward trend of 2013 will continue in 2014 and lies currently at a growth rate of 4 %. Up until the World Expo 2020 in Dubai, an increase of around 22 % is expected by the workforce and an increase in the gross national product of around 32 % in the UAE. Investment banks, such as Deutsche Bank, expect an investment volume of US$ 43 billion into infrastructure programs alone for the Expo, i.e. over the next six years.

In Dubai, the airline is also expecting larger volumes; the passenger capacity of currently 60 million passengers will be increased to 90 million by 2018. The neighboring countries invest heavily as well: In Qatar, much is happening, in particular with a view to the World Cup 2022, for example the Lusail City Project to be built at an estimated cost of US$ 45 billion. Saudi Arabia, with an existing project volume of US$ 77 billion, leads the list of gigantic projects in the Gulf States. In Saudi Arabia, ports, bridges, railroad lines and several cities are under construction.

The gigantic and fast growing construction sector in the Gulf region is also reflected in the leading trade show of the construction industry. The Big 5 has been held in Dubai for 35 years and, with 2,700 exhibitors, of which 80 % from other countries, must be the most international construction show of the world. Germany, represented by more than 150 exhibitors from the federal states of Hesse, North-Rhine Westphalia, Saxony, and Bavaria, is among the largest participants, after Italy, Turkey and China. The construction machinery fair PMV and Middle East Concrete take place parallel to the Big 5. 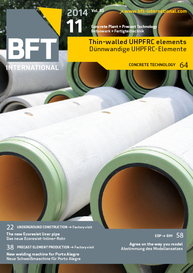 The Big 5 took place at the Dubai WorldTrade Center from November 17 to 20, 2014. According to information provided by the organizer, about 2,800 exhibitors from 61 countries came together at the...

From September 12 to 15, 2021, the Middle East Concrete trade fair, which is one of the BIG 5 construction fairs, will take place in Dubai, the capital of the Emirate of Dubai and the largest city...