Pan-type mixers became largely established as core component of highly efficient plants in the concrete production industry. Their well-engineered technology stands for reliably best production results at manageable costs and expenses. However, operators should keep an eye on the irks and quirks of the system. Because only pan-type mixers working perfectly unfold their virtues and guarantee high throughputs at a consistent quality – an essential foundation of high-quality products and customer satisfaction.

For several decades, the wear protection specialist Pucest has developed a whole range of optimizations and brought them to series production. The universal mixing arm as well as the Pucest Easy Cleaner and Pucest mixer protection, individually or combined in several options, allow for a permanent increase in performance at an enhanced reliability of the mixing systems.

According to experience, unrecognized or not repaired wear is the main cause of insufficient results in the production process and paralyzing plant failures. Even the best machine technology is hit hard by wear sooner or later. Which often starts gradually and almost unnoticed at first is growing to a real problem threatening the production process – with problems occurring at many points at once and in many ways. In this regard, two general root causes are characteristic for the technology of the pan-type mixer.

According to experience, the main focus of attention should be on the condition of the blading and the respective arrangement of the blades within the entire interaction of the mixing pan. This will make or break the efficiency of the production process as well as the quality of the final outcome. In principle, it applies: the centrifugal force naturally pushes the material outwards during the rotation of the rotor. By attaching two thirds of the blades in an inward direction, this fundamental physical law is to be taken into account.

In addition, the blades must not be arranged too close together. An intelligent arrangement in the form of right and left blades – seen in the direction of rotation of the overall concept – is also ideal. The arrangement of the blading most directly influences the wear of the pan, too. Common mistakes become obvious here: instead of being effectively mixed, the fed material accumulates in front of the blades, carrying it along without any relevant mixing effect. In doing so, the related friction significantly increases the abrasive wear of the pan housing.

The second source of wear is directly related to the mixing mechanism in the pan. The operating pressure even takes a toll on the very best mixing arm sooner or later. The typical weak points appear inevitably: first indications are worn out agitator arm bearings. Generally, it is possible to readjust them at first, however, an accelerated wear as a result can hardly be stopped. The solid guidance of the mixing arms is getting lost bit by bit. At the latest, when adjusting is eventually no more possible, the interior of the rotor embedded in concrete announces a progressed stage of plant decline.

The situation can hardly be improved permanently by halfhearted or selective repairs. Even comprehensive and frequent maintenance intervals do no longer provide a remedy, but rather being the cause of long and recurrent downtimes. Retrofitting to the universal mixing arm of Pucest Protect creates a totally new overall mechanical situation in the pan. The immediate effect is comprehensible and virtually obvious. The complete system of the Pucest Protect universal mixing arm is designed so as to eliminate the common causes of wear and to minimize maintenance effort and costs. For this purpose, the existing mixing arms including the spring elements, adjusting levers and other parts are removed from the rotor. The arm openings are closed by plates, and adapter plates are welded to the same. These plates are used to attach the new brackets for the Pucest mixing arms. The design also comprises the spring, which was placed in the rotor previously, and which is now positioned in the mixing arm of the mixer protected against external influences.

After the retrofitting, the universal mixing arms of Pucest Protect can be adjusted individually to all plant types. This starts with the required spring force. Once optimally preset to the existing plant, inconvenient readjusting of the spring will be a thing of the past. The mixing arms, moreover, can be turned to any direction so as to adapt the arrangement of the blading to the operating conditions. As with the blade the essential main components can be changed with effortless ease, if required, only short downtimes will occur in the long term. The potential of the Pucest Protect universal mixing arm is supported by additional features of the wear protection specialist Pucest.

After many years in operation, the plants often exhibit several layers of hardened cement past, arising from several generations, that are adhering to periphery and bottom of the mixing pan. Contrary to frequent opinion that an uncleaned mixer provides itself with a natural wear protection isn‘t true at all. On the contrary, this is the evilest nucleus of an accelerated decay of even the best plant equipment. Cluelessness and carelessness are not surprising here, because cleaning is an exhausting and dirty task to undertake – depending on the type of plant, sometimes really „dangerous“ for the worker entrusted with the task, in terms of modern occupational health and safety.

The cleaning process is mostly carried out manually in irregular intervals using conventional high-pressure cleansers, and it is often not very effective. In this process even serious mistakes are often made, such as cleaning procedures with chippings. In such cases, a supposed cleaning function negligently turns into a fiasco resulting in accelerated wear.

There is a modern alternative available in the form of the innovative, automated Pucest Protect Easy Cleaner high-pressure cleaning system. This system takes a quantum leap towards permanent mixer cleaning in unattended operation. In practice, the system demonstrates a really impressive performance. Regular quick wash cycles and main wash cycles are required in order to avoid reliably that residues of viscous cement paste will set to hardened cement paste in the mixer. The Pucest Protect Easy Cleaner takes over this task in cleaning intervals. Water is blasted with a pressure of about 170 bar through three spraying nozzles inserted in the cover of the pan in the entire mixer.

This however does not exhaust the possibilities for optimizing a pan-type mixer at all. The Pucest mixer protection provides operators with lining plates made of the Pucest material. As flexible wear protection plates, they virtually armor the interior surface of the mixer. All system components of Pucest Protect were developed with the Pucest material as a center piece. In combination with processing steels of highest quality, over several years, this resulted in the further development of a well-engineered technology which can be individually adapted to all plant types.

Pucest takes into account that every existing plant, of course, features „specialties“ –partially due to their design and partially the result of long-term operation. This individual features require individual modifications – and these are possible with the solutions of Pucest Protect. 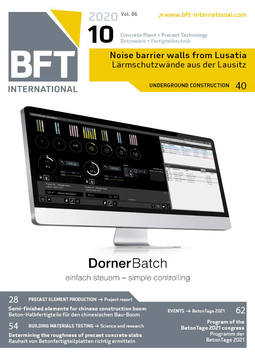 Every concrete worker is familiar with the pictures of a worn out mixing arm bearing and spring units with hardened concrete residues. As is well-known, all these may result in numerous problems. Pan...

Every person involved in concrete manufacturing knows the countless problems with hardened concrete caused by worn out mixing arm bearings and spring units. Pan mixers of any common manufacturer...

Adhesions and wear that occur, for example, at transition points and on discharge funnels, mostly result in unscheduled downtimes. Cost-intensive repairs on the greater part of the production...

Protection of mixers against wear: Solutions for every application

Every mixing and agitation process causes continual wear of the mixer employed. Annular trough or planetary mixers, for example, mix the aggregates with a high intensity through compulsory rotation of...