Just over two years ago we reported in BFT International about a kick-off project by Precontech in the Philippines. At that time, the project involved 38,000 click connectors for a large-scale housing project with 3,000 row houses. Upon completion of the construction project, the total had amounted to around 50,000.

With the click connector, based on the PTA anchor channels, short erection times are achieved, and have already attracted the interest of four additional precast plants. In September 2019, Dieter Rausch, owner and managing director of Precontech, has already visited these plants personally and further large orders can be expected.

More projects in India and China

Thanks not least to the above described project successes, two further talks with precasters and an earthquake technology consultant for autoclaved-aerated concrete and lightweight-concrete panels have taken place. A great deal of interest has arisen especially from new developments in seismic connections using modular blocks of lightweight concrete, circumferential joint modules as predetermined breaking points of low density as well as sandwich panels with a thin concrete cover as non-loadbearing walls in skeleton frame construction.

In China, Dieter Rausch, Managing Director of PreConTech with 40-year experience in anchoring technique of double walls, gave a demonstration at a construction group with which a joint venture is planned, which has a workforce of 70,000 and several circulation systems for production of double walls, double walls with interior insulation and floor slab elements. Demonstrations included a number of special applications for double walls, e.g., remote activation and rotating mechanisms for turning very long double walls from the horizontal into the vertical position.

Another large-scale project of a similar kind is planned in the near future in Bangalore.

When we finally, asked him about his other visions, Dieter Rausch answered: “Indeed, I see myself as a visionary concerning the further development not only of our products, but of the entire precast construction method. Look at the enormous potential, considering, for example, that, depending on capacity,  1,000 m² of wall elements can easily produced on a single day. Or, compared to in-situ construction, enables two walls to be connected by click connectors, with full loadbearing within only half a minute, enabling a very rapid erection process.” 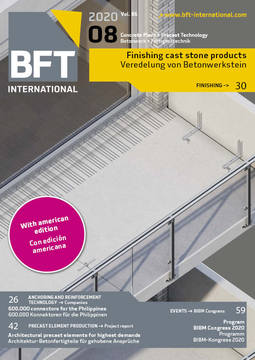 For about 30 years, Precontech International and BVT Rausch GmbH have been offering all common lifting anchor and sandwich anchor systems as well as PTA anchor channels which are in particular...

PreConTech GmbH recently developed an anchoring system for protecting masonry units made of various materials from the impact of seismic and thermal activity and from the effects of wind. The...

This innovation consists of a connection and erection system on the basis of a PTA anchor channel with double T-head for solid walls and insulated wall panels. The Click Connector is preassembled in...

Connector for securing a concrete wall panel to a concrete foundation