Within the scope of the SPIN project (www.spin.bam.de), three staff members of the Federal Institute for Materials Research and Testing (BAM), Berlin, traveled to Tanzania on 30 June. There they, together with scientists from several other African countries, were to give a course of lectures for Masters and Ph.D. students as well as leading a kick-off workshop for an all-African round-robin test for cement testing.

The first stop of the BAM staff was in Zanzibar, where they inspected an on-going a building reinstatement project and discussed plans for the conference “Advances in Cement and Concrete Technology in Africa” (www.accta2013.com) to be held in January 2013. At the international conference in Johannesburg, which is mainly organized by BAM and the University of the Witwatersrand, more than 300 visitors from over 40 nations will come together.

The next stop was in Dar es Salaam, Tanzania’s seat of government, for the opening of a two-day training program for students from Tanzania, Rwanda, Burundi, Kongo, South Africa, and Mozambique. The program was opened by Prof. Mrema (University of Dar es Salaam) with a lecture on alternative cementitious materials, followed by a presentation on the basics of rheology and a paper from the construction chemicals industry on innovations in the concrete sector by Wolfram Schmidt (BAM). Next followed  a lecture by Ryan Bradley (University of the Witwatersrand) on the influence of wind loads on shell constructions and a presentation on the application regulations for shotcrete construction by Prof. Regina Stratmann-Albert (FH Darmstadt), who attended the courses as a guest speaker.

In conclusion, Wolfram Schmidt gave a tour of a laboratory workshop where the students were acquainted with problems of packing density optimization and the mechanisms of action of polycarboxylate ethers (superplasticizers) and polysaccharides (stabilizers) for controlling the rheology of the concrete in a hands-on setting.

The second day began with Dr. John Makunza (University of Dar es Salaam), who lectured on the design and load assumptions for bridge structures. This was followed by a brief paper by Akindehinde Ayotunde Akindahunsi (University of the Witwatersrand) on the use of starch in cement-bound systems, a topic that is currently researched in collaboration with BAM.

Prof. Mitch Gohnert (University of the Witwatersrand) provoked with the question about the existence of shear stresses and explained why the failure of concrete members is nearly exclusively induced by tension failure. In conclusion, Renato Rajzer (Civil Engineering Institute of Croatia) lectured on the normative regulations of quality assurance for site works. All presentations were received with great enthusiasm by the students and overwhelming interest.

In the following two days, a kick-off workshop on the first round-robin test for testing cement in accordance with EN 196 in Africa took place. Participants from a total of 27 construction materials testing laboratories from 20 countries, among them 18 from Africa, met to discuss the details of the round-robin test. The round-robin test is conducted under the leadership of Department 7 of BAM and the financial support of the Physikalisch-Technische Bundesanstalt (PTB), the German national metrology institute providing scientific and technical services, as well as the support of the SPIN project. The participating partners come from universities, state and private test institutes, the industry as well as a number of national standardization bureaus. 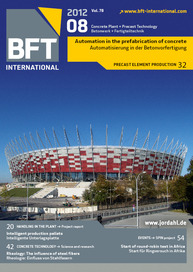 Approaches to testing an innovative material ­under ­real-life conditions

On-site quality control for concrete is well established in reinforced concrete construction. Simple standard tests, which can be carried out by a lot of material testing institutes, allow for an...

Workshop:Cement and Concrete for Africa

The workshop highlights recent developments in the field of cement and concrete research with impact on the local and global economy. Challenges, future developments and opportunities for the African...

The German BAM Federal Institute for Materials Research and Testing in collaboration with the German Metrology Institute (PTB) are organising an Africa wide Proficiency Testing Scheme for the year...

In many parts of Africa, the economies are rising at an increasing pace, and optimism is spreading all over the continent. Along with the economic upswing comes the need for construction, which...

Modern architecture and new building systems create affordable housing for many people in Africa. At the same time, it will become an important job machine for many countries. To this end, the German...