In this step, a joint compound is automatically applied to the surface of the production pallet in a grid pattern according to the CAD plans. This sealing compound provides the following features: it replicates the contours of the joint, does not link to the joint concrete, equalizes the tolerances of the production pallet, dampens vibration and thus protects facade panels from damage during the subsequent compaction process, keeps the facade panels firmly in their positions, and enables sealing and leveling to the formwork edges.

A robot removes tiles, clinker bricks etc from the transport unit and conveys them to a cutting unit or to the placing robot. The placing robot grabs each piece, moves it into its defined position and accurately presses it into the previously applied joint compound at a spacing that can be freely defined (on the basis of CAD data).

To date, both insulation layer and wall connectors have always been placed manually: the insulation panel was cut to size, wall connector openings were drilled, the insulation panel was placed on the fresh concrete, the wall connectors were inserted and fixed, and joints were filled with foam. However, this manual production process required a high amount of labor at the precast plant and was thus not associated with significant benefits compared to insulating the element on the construction site. The manual method makes it impossible to complete work within the cycle time of the pallet circulation system. The new, automated process is different: the insulation panels delivered in stacks are automatically destacked and cut to size using CAD data. Boreholes or openings are inserted to accommodate the wall connectors. A placing robot positions the panels on the freshly cast face concrete layer and places the wall connectors in the previously made openings in the fresh concrete in a fully automated process. This system is suitable for the manufacture of all types of insulated precast elements (floors, double walls, sandwich walls).

Sommer Anlagentechnik GmbH, based in Altheim/Landshut, Germany, is responsible for design and engineering, electrical systems planning, the manufacture of control cabinets, and the production of the new systems. SAA Engineering GmbH supplies the equipment control systems – a demanding task for the Vienna-based system automation experts: in the first step, the CAD system specifications had to be analyzed, and the interfaces were extended because the number of elements to be produced clearly exceeds the capacity provided by the usual „UNI“ interfaces. At the same time, a seamless representation in the BIM (Building Information Model) was ensured. Data processing in the master computer was optimized, and new machine interfaces were developed to enable NC data interchange and process data feedback. Moreover, control systems for the articulated robots had to be developed for all work stations on the basis of the tried and tested MFSR robot control and visualization system.

In the meantime, the new, automated production line has successfully completed its testing phase and attracted first buyers. The new system will be presented to a broader audience for the first time on 6 and 7 December 2011 on the occasion of the „Engineering Days“ to be held in Vienna. 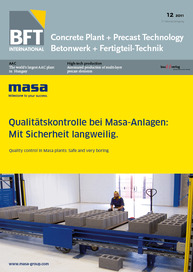 The JFI process is an innovation from Sommer Anlagentechnik and SAA Engineering, which has been patented in 2012. The process enables fully automated production of multi-layer concrete elements to...

Thermal walls with integrated core insulation make a decisive contribution to energy savings. Therefore, they are especially qualified for being used as building material if the building owner or the...

This anchor realizes U-values between 0.236 W/m²K and 0.391 W/m²K at an average hollow wall of 30.0 cm up to 36.5 cm. Solutions with conventional lattice girders have significantly higher U-values....